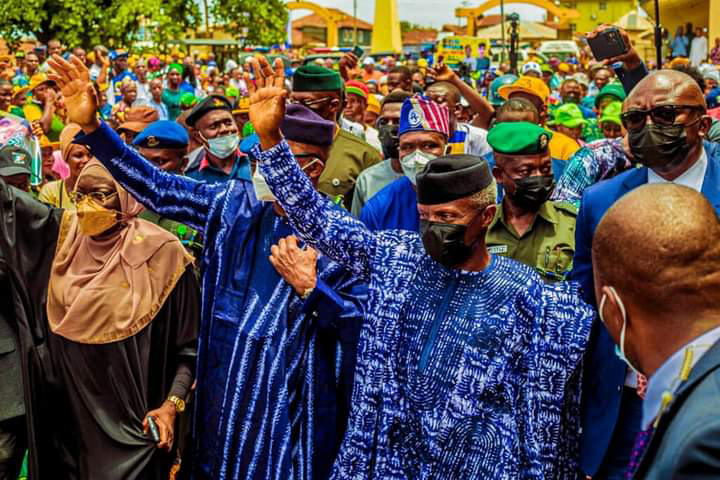 Dapo Abiodun, governor of Ogun, has expressed his support for the presidential bid of Vice-President Osinbajo.

Abiodun spoke on Tuesday when Osinbajo visited Ogun state to consult stakeholders of the All Progressives Congress (APC) on his decision to run for president in the 2023 general election.

Speaking when they arrived the palace of Babatunde Ajayi, the Akarigbo of Remoland, Abiodun said the vice-president played a significant role in ensuring he won the 2019 governorship election.

According to the Ogun governor, Osinbajo’s academic qualifications as well as his pedigree serving as vice-president make him the best candidate for the presidency.

“Your excellency, your antecedents speak for itself. Ideally, you should just come here and wave to us and go. But you have taken time to remind us of where you have come from, what you have been.

“You are an illustrious son, not just of Remoland but of Nigeria, and one that we are indeed very proud of. On behalf of all of us gathered here today, of which I represent them as a son of Remoland, your antecedents speak for itself.

“If becoming president is by qualification, you’ve earned it. You are in office today as the vice-president of Nigeria. You’ve been in office for seven years. You’ve served your boss meritoriously. You are mature in this office. You’ve demonstrated capacity and capability.

“If presidency is by way of an award, we will just gather here today and will award it to you. However, it isn’t an award; it’s a contest. We do not have a doubt in our minds that with your pedigree, the Lord Almighty that we all serve and that you also serve, will grant you the desires of your heart.

In the buildup to the 2019 governorship election, there was internal crisis in the APC over the choice of the party’s governorship candidate.

After much back and forth over the matter, Akinlade dumped the APC after he lost the party’s governorship ticket to Abiodun, while Amosun was suspended from the APC over “anti-party activities”.

However, Akinlade has since rejoined the party, while the APC later lifted suspension on Amosun