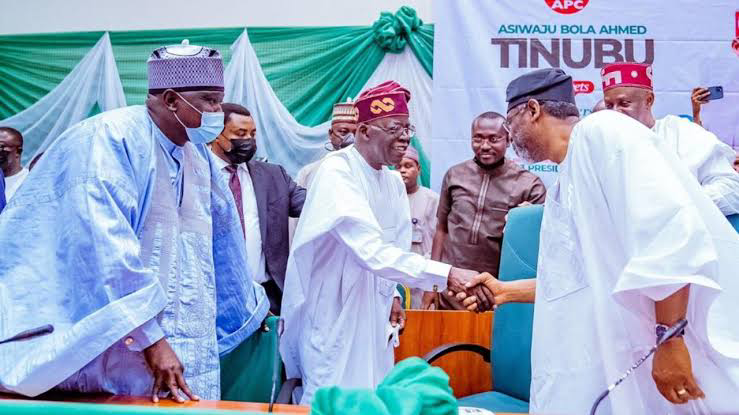 Members of the All Progressives Congress (APC) Caucus in the House of Representatives, on Wednesday, endorsed Asiwaju Ahmed Bola Tinubu, as the ruling party’s Presidential candidate in the 2023 general election.

In his opening address, the Speaker, Hon Femi Gbajabiamila, who described Tinubu as the only candidate for the Presidency, challenged those intending to vie for the Presidency to desist from giving flimsy excuses to declare their intention.

He maintained that it does not speak well of a party that boasts as the largest political party in the continent, not to see anyone that could rival Tinubu barely seven weeks to the APC party primary.

“I personally think it is wrong we are only hearing of names and nobody is campaigning,” Hon Gbajabiamila noted.

While addressing the lawmakers, the former Lagos State Governor, averred that he is the most qualified Nigerian for the exalted position of President in the 2023 general elections, saying: “No other one in the race, hidden or open. I am the only one in the race that is most competent, most qualified to be your President,” he said.

While soliciting for the lawmakers’ endorsement, he urged them to mobilise all their supporters to vote for him at the party primary.