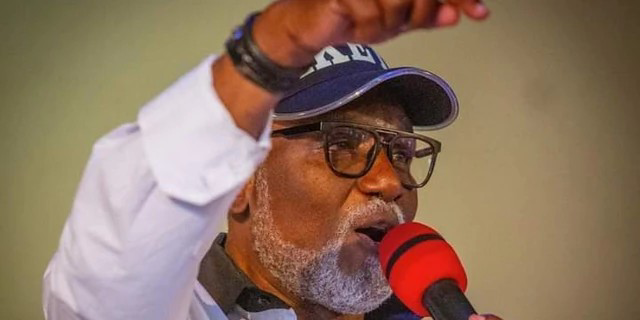 The APC has been struggling to contain an internal crisis that has pitched some sets of governors against the other.

The internal wranglings, however, took a new turn on Monday, March 6, 2022, when Governor Abubakar Sani Bello, stormed the National Secretariat of the party to assume duties as the Acting-Chairman of the Caretaker/Extraordinary Convention Planning Committee (CECPC).

The CECPC, which was earlier chaired by Buni, was tasked with the responsibilities of organising the party’s National Convention.

However, many party members have alleged that Buni was not interested in carrying out the task given to him by Buhari and is in fact plotting with some elements to plunge the party into a crisis ahead of the 2023 elections.

In a statement released on Thursday, March 10, 2022, Akeredolu expressed satisfaction on the emergence of Belo as the new chairman, while revealing that happenings within the APC under Buni in recent months have been a huge embarrassment.

The statement, personally signed by the Ondo Governor, was titled “Buni, Pocket-filling Black Legs In Corridors Of Power Tried To Supplant President’s Will-Akeredolu.”

Akeredolu said “Without necessarily dwelling on details that are known to critical stakeholders, the path taken lately by Governor Mai Mala Buni, the immediate past head of the CECPC and an indivisible few, is an unenviable trajectory undeserving of our dear party. It is a disdainful narrative,” the statement reads.

“Nevertheless, the courage and determination as well as shrewd sincerity of purpose demonstrated by most of the APC Governors remain a delight.

“Significantly, the swift response and prompt action taken by Mr President have, in no small means, salvaged our great party from internal scavengers. We indeed, survived a civilian coup largely inspired by mischief and incurable lust for power through artificial barricades,” the statement read in part.

The governor said his belief in Bello’s leadership of the APC is shared by his other colleagues, except for a few whom her described as “Yahoo Yahoo” governors.

Akeredolu said “Succinctly, aside from feeling very delighted as a major stakeholder in the latest successful Rescue Mission, I express my confidence in the ability and capacity of Governor Sani Bello(ABU LOLO) to take APC through. We, the Governors are for the party except for the few “Yahoo, Yahoo” Governors (apologies to Salihu, former DG of the Progressive Governors’ Forum) who were hand in glove with Buni to circumvent the will of majority of our Party (APC) members. Progressive Governors in the true name, mostly all of us, are determined to see our Party through these patchy parts at all cost.

“None of the scanty number has the guts to carry out their imaginary threats as reported in sponsored stories. We dare them to leave the party. Their short-lived antics in arm-twisting Governor Buni and probably, some pocket filling elements within the corridors of power to supplant the President’s will through fake letters, endorsements as well as ‘Black Market’ injunction (procured since November 2021) are despicable.

“Now that the clear motive aimed at frustrating our national convention has been botched, our dear party is on the track to greatness. Gov Sani Bello, ABU LOLO, carry on; you have the backing of the majority of us.

“You shall see our FULL backing come Thursday, 17th March 2022 at the National Executive Committee meeting. But as you know, this is ONLY for the conduct of the NATIONAL CONVENTION.”

Recall that Kaduna state governor, Nasiru El-Rufai, had earlier declared that Buni’s removal as caretaker chairman was approved by 19 governors in the party.

El-Rufai while speaking on a Channels Television programme, ‘Politics Today’ on Wednesday, March 9, 2022, said certain actions and inactions of Yobe State Governor were hindrances to the plan of the ruling party to hold its convention.

He added that 19 of the 23 governors elected on the ticket of the party supported the removal of Buni to prevent the party from collapsing.