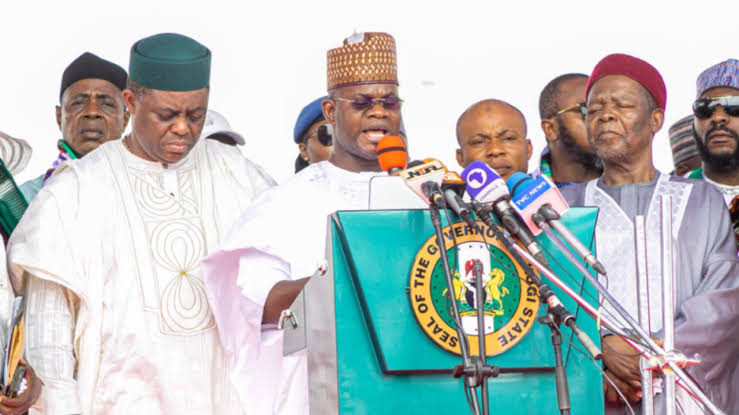 Yahaya Bello, governor of Kogi state, has declared his intention to run for president in 2023 on the platform of the All Progressives Congress (APC).

The governor made his intention official on Saturday at the Eagle Square in Abuja.

Bello, who is completing a second term as governor, highlighted the achievements of his government and said he would replicate the same if elected president.

While acknowledging the current challenges in the country, Bello hailed President Muhammadu Buhari whom he said had done much for the country.

The governor also said he would consolidate on the legacy of the president.

Bello said if elected president in 2023, his administration will create 20 million millionaires by 2030.

“In 2018, with APC in the saddle that figure has dropped to about 87m people yet Nigeria overtook India as the poverty capital of the world. Just this month, Nigeria through the effort of the President relinquished the title back to India and brought down the figure to about 70m people,” he said.

“It is therefore clear that our path to national prosperity lies in pulling millions of Nigeria out of poverty.

“The Buhari administration has a target of lifting 100 million Nigerians out of poverty by the year 2030. A Yahaya Bello presidency will have an additional target of creating 20 million naira millionaires by the same year 2030 with the aim that each of them will empower five other citizens.”

Bello said he will be running on the “broad political philosophy of progressive activism through social action and political reforms”.

“We are so blessed as a nation and yet it does not always seem so. I am running to restore hope by providing guarantees for security, unity and progress to all Nigerians,” he said.

Our focus will be proper management of our great diversities, so that it can really be an advantage. We will foster more cooperation and integration amongst citizens and make sure that progress is made steadily across all sectors and indicators.

“Despite the challenges facing Nigeria today, no one can deny that President Muhammadu Buhari has given our country the greatest investment since this fourth republic began. In addition, this administration has invested heavily in our national security. The war against insecurity may be taking longer than earlier expected, but President Buhari has ensured that we have the combat resources.”

Bello added that under the APC government, Nigeria is pushing forward.