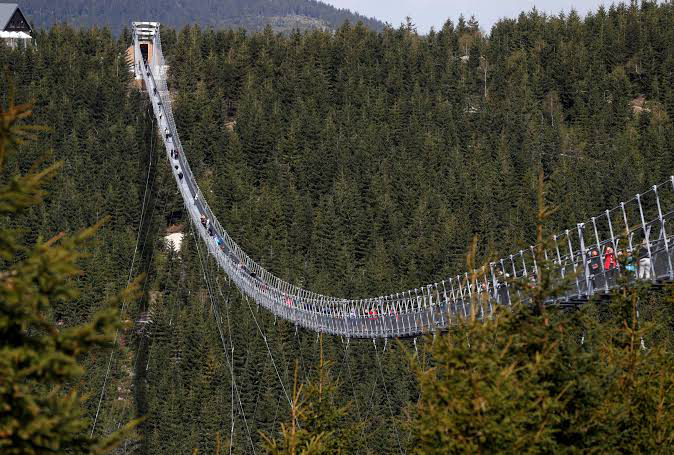 The world’s longest suspended pedestrian bridge has opened in Czech Republic.Walking from one mountain to another, suspended high above ground with only a vast valley yawning below, isn’t for the fainthearted.But thrill-seekers — and lovers of infrastructure — will be flocking to the Dolní Morava vacation resort in the northeast of the Czech Republic to scale the new world’s longest suspension footbridge.

Under construction for the past two years, the 721-meter-long-span (2,365 feet), appropriately named Sky Bridge 721, officially opened on May 13. The walkway promises spectacular views of the cloud-shrouded Jeseníky mountains, and an overall electrifying, albeit slightly terrifying, experience.

Austrian blogger Victoria Fellner visited Sky Bridge 721 earlier this week as part of a preview event, sharing photos on her Instagram account.Fellner told CNN Travel that taking her first step on the bridge gave her a “queasy feeling.”But this initial fear subsided as she admired the surrounding landscape.”I was afraid that the suspension bridge would shake a lot, but it wasn’t that bad,” said Fellner. “The view is really impressive and you can even see the forest below through the trellis!

Luckily I’m not afraid of heights.”Sky Bridge 721, suspended by cables, hangs 95 meters above the valley floor and spans between 1,110 and 1,116 meters above sea level. The bridge can be accessed by cable car and walking across is a one-way deal. Upon exiting the walkway at the other side, visitors can make their way along a paved forest path lined with signs detailing Czech history. There’s also a corresponding virtual reality phone game.

The 1.2-meter-wide Sky Bridge is open to children of all ages and heights, but is not suitable for people with pushchairs or wheelchairs.Travelers must currently book Sky Bridge 721 tickets ahead of time on the Dolní Morava website, with prices for adults starting at 350 Czech Koruna (around $14.60).

Dolní Morava, situated on the Czech border with Poland, is a vacation spot that’s also home to ski slopes, an alpine roller coaster purporting to be the second longest in Europe, a mountaintop restaurant and an attraction called the Sky Walk — a curved structure with a wooden walkway and slide located 1,116 meters above sea level.

Fear not, the bridge has undergone extensive safety testing and will close when the wind speeds exceed 135km/hour (and when it needs maintenance).about:blank

The construction of the bridge cost around €8 million and took two years to build. It’s expected to be added to the Guinness Book of Records very soon and takes the title away from the 516 Arouca bridge in Portugal.

Fear and adrenaline were some of the feelings as the first tourists stepped out on the world’s longest suspension footbridge, spanning a mountain valley in the Czech Republic.

“We came here because we love adrenaline,” day-hiker Michaela Klestilova said while approaching the 721-metre footbridge that hangs 95 metres above the ground at its highest point and opened to the public on Friday.

PREVIOUS POST 2023: Buhari has preferred candidate to succeed him – Presidency
NEXT POST For the first time in Europe, an autonomous unmanned vehicle delivered a parcel on public roads