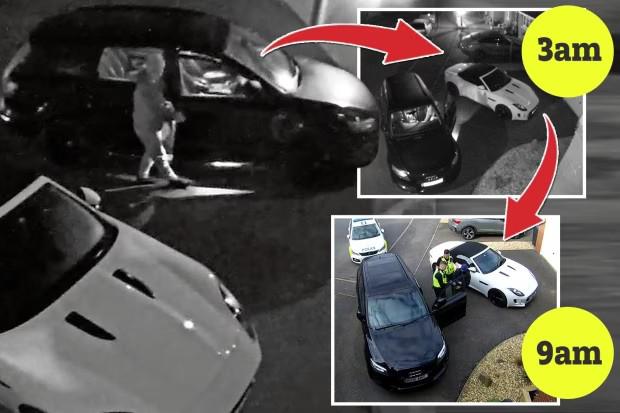 A LAZY thief broke into a family’s car — then fell asleep in it for six hours.The owners called police who woke up the intruder sleeping peacefully in the front seat.

The thief had been spotted prowling the neighbourhood before forcing the door of a Audi Q7 parked overnight on a driveway.

Inside he helped himself to cash, headphones and other personal items before nodding off — only to be spotted by the owners’ 12-year-old son the following morning.

Mum-of-two Zoe Reed, 46, told The Sun: “We didn’t know whether to laugh or cry.It was scary to see the man who had broken in, but funny that he made himself comfy and dozed off.”

Neighbourhood Watch members alerted each other on WhatsApp to a car thief on the prowl just before 3am last Friday in Sutton Coldfield, West Midlands.

But Zoe and her hubby Simon, 51, who are both accountants, were asleep and did not spot the warning messages until they woke up.

She recalled: “We ran to the window and checked that our car was still there, and then didn’t think anything else of it.

“But shortly afterwards our son came running to tell us, ‘Mum, the man is still in the car”.

Dan, 12, and his brother Carter, eight, saw the thief snoozing in the Audi just yards from their front door.

Zoe said: “It was so bizarre seeing him fast asleep. And very odd not wanting to wake him in case he fled.

“Our golden cocker spaniel dog Archie had slept through the whole thing in the front room, and we made sure he didn’t bark until the police came and arrested the fool.

“Officers woke him up and said, ‘Hello there, what are you doing here?’.

“The first thing the intruder said was, ‘You can’t arrest me for theft because I haven’t left with anything’.

“We had cash, headphones, CDs and other personal items in the car, and he’d helped himself to the lot.

“Our boys found it terribly exciting, especially when the police returned to take statements and see our video footage.

CCTV showed the man — wearing a blue hoodie and a dark coat — climbing into their car in the early hours after trying others in the area.

The following morning, two police officers in stab vests arrive to wake him up.

He is seen sleepily stumbling from the vehicle before the cops retrieve items from his pockets.

Zoe said: “We were able to see the funny side. We had Britain’s laziest burglar asleep in our car.”

West Midlands Police confirmed a 42-year-old man, of Tamworth, Staffordshire, was arrested and charged with theft from a motor vehicle and vehicle interference.

PREVIOUS POST Apple may unveil first full-screen iPhone in 2024
NEXT POST U.K. Should Consider Ban on Smacking as children are ‘more vulnerable than adults’