Wike, Makinde, Ortom, Ikpeazu regroup in LondonTo Strategize Ahead Of 2023 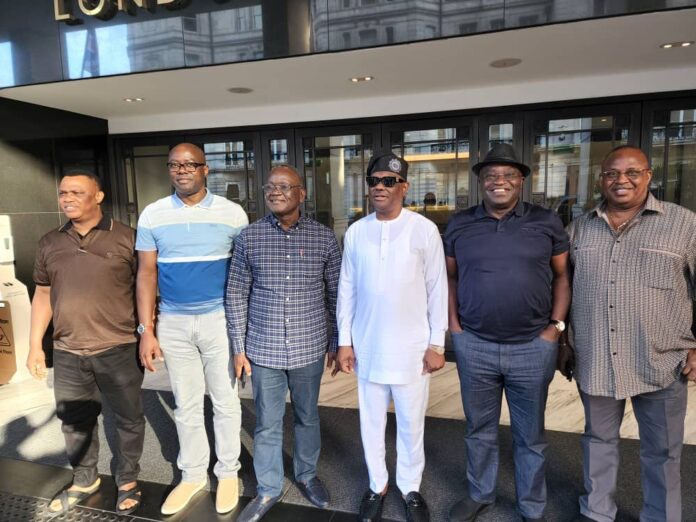 Rivers State Governor, Nyesom Wike with his Benue, Oyo and Abia counterparts, Samuel Ortom, Seyi Makinde and Okezie Ikpeazu on Sunday held a strategy meeting in London ahead of the 2023 elections.

Also present at the meeting were Senator Olaka Nwogu and Chief Dan Orbih.

Vardiafrica recalled that several high-profile politicians have paid visits to Wike at his residence in Port Harcourt.

There have been attempts to pacify the governor following the ill-treatment meted on him by some members of the Peoples Democratic Party (PDP).

However, he has continued to maintain silence on his next move after he was jettisoned by the PDP presidential flagbearer, Atiku Abubakar for the slot of the party’s vice presidential candidate.

A highly placed PDP source, has confirmed to Nigerian pilot that since the crisis erupt over the choice of the Vice Presidential candidate of the PDP, Governor Samuel Ortom, of Benue State has been under intense pressure to persuade the Rivers State Governor Nyesom Wike, not to withdraw his support for the party or dump the party.

According to the source, The Governor of Benue State was pressurised by the hierarch of the party to summon a meeting immediately in London following, the Friday, visit of Lagos, Ekiti, Ondo Governors Sanolu, Kayode and Akeredolu as well as former governor of Ekiti State Ayodele Fayose.

As of the time of filling in this report, the governors are meeting under closed door in London.