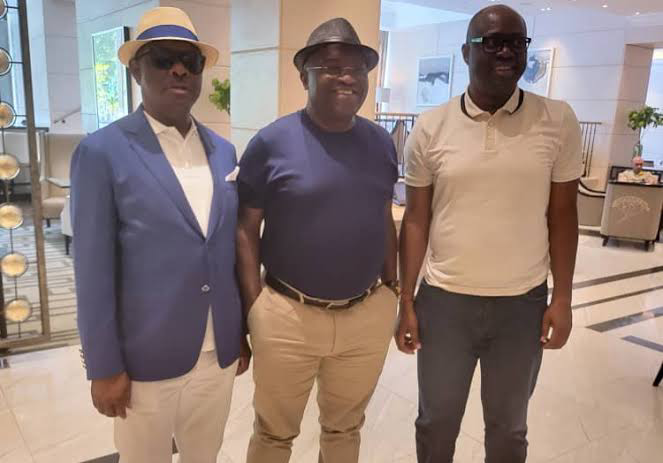 The national caucus of the Peoples Democratic Party (PDP) met on Wednesday, ahead of the national executive committee (NEC) scheduled to hold today.

The PDP national caucus meeting was held at the Akwa Ibom governor’s lodge in Asokoro, Abuja.

Members of the national caucus comprise serving and former presidents and vice-presidents, principal officers of the senate and house of representatives, and all serving state governors — who are members of the party.

Iyorchia Ayu, PDP chairman; Atiku Abubakar, the party’s presidential candidate; Walid Jibrin, the board of trustees (BoT) chairman; Aminu Tambuwal, governor of Sokoto; Bala Mohammed of Bauchi, and Douye Diri of Bayelsa were among those present at the meeting held on Wednesday.

However, Nyesom Wike, governor of Rivers; Okezie Ikpeazu of Abia, Seyi Makinde of Oyo, and Ifeanyi Ugwuanyi of Enugu, Udom Emmanuel of Akwa Ibom, were among the governors that were absent from the meeting.

Samuel Ortom, governor of Benue, who was not present at the meeting, was represented by his deputy, Benson Abounu.

The outcome of the meeting was not made public.

Meanwhile, protesters stormed the venue of the meeting, and demanded the removal of Ayu.

They wielded placards with inscriptions: “Ayu must go. There must be justice in the PDP.”

Ayu has been under pressure of late, with calls for his resignation coming from different quarters amid the party’s internal crisis.

Allies of Nyesom Wike, governor of Rivers, demanded that the PDP national chairman should step down — as a precondition for resolving the rift with Atiku Abubakar, the PDP presidential candidate.

Crisis broke out in the main opposition party after Abubakar picked Ifeanyi Okowa, governor of Delta, as his running mate for the 2023 elections, overlooking Wike who was recommended by a panel comprising NWC members and governors.

Wike came second to Abubakar in the PDP presidential primary election in May after the last-minute withdrawal of Aminu Tambuwal, governor of Sokoto, who asked his supporters to back the former vice-president.

A day after the primary election, Ayu openly celebrated Atiku’s victory, describing Tambuwal as “the hero of the convention”.

The NEC meeting will take a decision on the calls for Ayu’s removal and also ratify the membership of the presidential campaign council for Abubakar.