Wike Has A Future In Nigerian Politics – Atiku 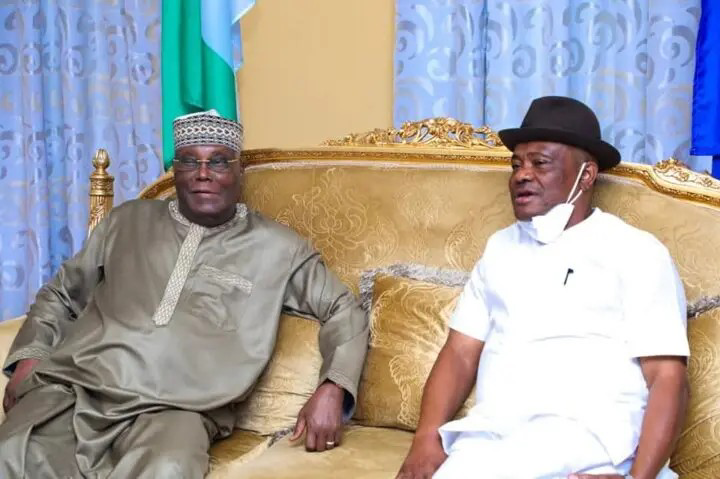 Atiku Abubakar, the presidential candidate of the Peoples Democratic Party (PDP), has said that the Governor of Rivers State, Nyesom Wike, has a future in Nigerian politics.

The PDP candidate had picked Governor Ifeanyi Okowa of Delta State as his running mate for the 2023 presidential election, even though Wike was one of those nominated by the party’s national working committee (NWC).

The choice had created a fissure within the party, with Wike expressing resentment over the decision.

Speaking with ARISE TV on Friday, the former vice president said the committee set up for the selection of the running mate had confronted him with three names from which he picked Okowa.

He said, “First and foremost, let me put the records straight. The committee that was set up at my own instance, deliberated there was no vote, and they recommended three names. Because they knew that it was my prerogative to pick any of the three. So, there was actually no voting taken.

“And I have the report of that committee. The report said, ‘We are recommending the following.’ And they recommended three people. And out of those three people, I picked one. I didn’t go out of that recommendation.”

The former vice president also said Wike was not rejected, and described the governor as a brilliant, courageous and tenacious politician who has a future in Nigerian politics.

“Governor Wike was not rejected. Nobody was rejected in the party. But you must understand that it’s the prerogative of the candidate to pick his running mate — a running mate he believes he can work with amicably, and then also deliver the policies of the party, and also try to unify the country.

“Governor Wike is a brilliant politician. He’s courageous, tenacious. I believe he has a future in the political evolution of this country.”