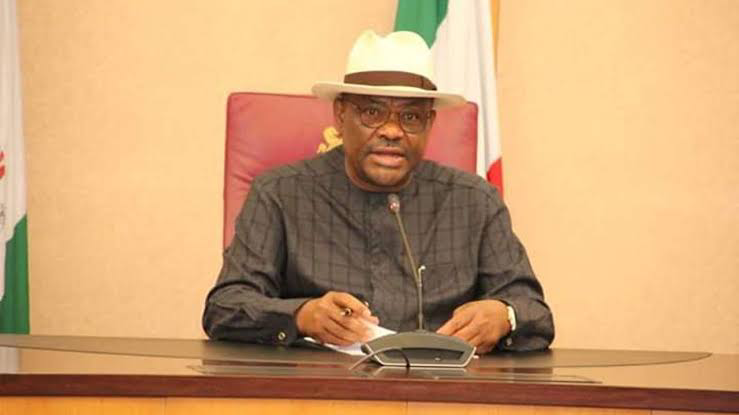 Governor Nyesom Wike has joined a growing list of presidential contenders in 2023.

The Rivers governor disclosed this when he visited Makurdi on Sunday and held talks with some delegates of the opposition Peoples Democratic Party.

During his declaration, Mr Wike said he has the courage and resources to dislodge the ruling All Progressives Congress from power at the ballot box

The governor, who intimated the stakeholders about his intention to run for the presidency, solicited for Benue PDP votes in the coming national delegates convention of the party, even as he stressed on zoning

To remove APC from power, I’m the person who can tell them enough is enough. We must take this power and I’m ready to take it for PDP. God is with us that’s why APC keeps failing everyday.“I’m declaring it (presidential ambition) for the first time in Benue. I’m going to run for election,” Wike said.

He warned stakeholders not to sell their votes, but give it to him, adding that some of the PDP presidential aspirants were only after the power in order for personal gains.Wike also accused those who once left the party and came back to seek power of being the reason the party lost election in 2015, noting that those founding fathers who ran away from the party and still wanted to be recognised have lost their shares.

He said, “By the time you ran away, you sold your share as a founding father so you can no longer retain your position of founding fathers.“I stood for this party. I work for this party since 1998. I have nowhere to run to and that’s why anything that happens to this party I take it personally. I have never relented.“In 2015, those who ran away made us lose the election.

Today, they are crying but some of us stood and said PDP will not die.“Some people want to use Nigeria to buy back their personal business. They talk about private sector – let them mention the private business that had survived. Is it banks that your father had? Everybody is an employer of labour even in my house  I have 50 people who feed from me. They should stop deceiving us.“I have performed as a governor and can carry my shoulders high anywhere. I have the capacity to face this evil government, give me the mandate. I will speak the truth to power and nothing but the truth. I have the capacity to move this country forward.”

Earlier, Governor Samuel Ortom who hosted Wike prayed that God will grant him his desire to rule the country.Ortom recalled that his Rivers counterpart had never turned his back on Benue, especially in caring for the teeming displaced people occasioned by herders’ invasions in some parts of the state.“On southern presidency I stand,” Ortom said.

His disclosure comes barely days after Aminu Tambuwal, Atiku Abubakar and Peter Obi declared their interests in the presidential ticket of the main opposition party