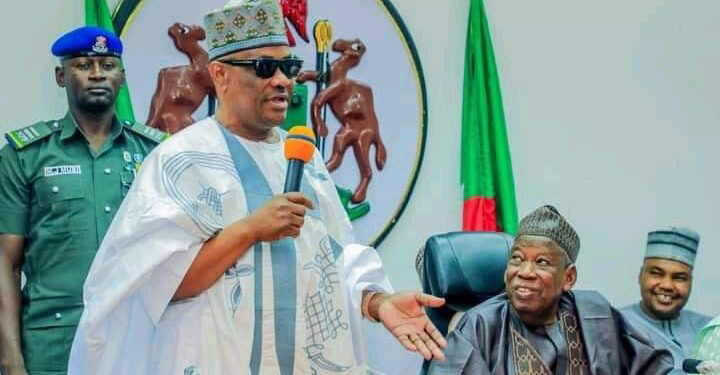 Rivers Governor Nyesom Wike has decried the presidential pardons granted to two former governors who were convicted and jailed for corruption.

Speaking in Kano on Monday at the People’s Democratic Party (PDP) state secretariat, the governor said that this should not have happened under a government that has made so much noise about fighting corruption in the country.

‘This is a Wayo [frauluent] government; a government that promises one thing and does another. They promised that they would fight corruption. Is that not so? But they went and charged some people to court and the court said these people were guilty and the same people who said that they were fighting corruption, went through the backdoor and released the very people that the court had declared as corrupt,’ Wike, a PDP presidential aspirant, stated.

‘This is the same government that complained that the Judiciary was not fighting corruption enough. Now, look at what the judges had passed through – suffering sleepless nights to deal with these cases- from the judge of the lower court to those of the appeal court to those of the Supreme court. Every one of these efforts has been reduced to waste.

‘If this president knew that he did not want to fight corruption, then he should long have disbanded the EFCC and ICPC because, by his action, he has thoroughly embarrassed these hard fighting institutions,’ he stated.

Wike lamented that by the presidential pardon, the Buhari administration has dealt a great blow to both the Economic and Financial Crimes Commission (EFCC) and the Independent and Corrupt Practices Commission (ICPC), insisting that the government has made a mockery of both institutions in the eyes of Nigerians and the global community.

He suggested that the presidential pardon may not be unconnected to the forthcoming general elections, adding that it was intended to win political favours from voters in Taraba and Plateau State for the All Progressives Congress (APC) during the elections.

Governor Wike explained his absence at the meeting of the Council of State, saying they never provided the invitees with the agenda of the meeting.

‘If they truly wanted me to come, they should have sent me the agenda so that I know what I was coming to do,’ the governor said.

He admitted that his deputy attended the meeting but disappeared after she saw the agenda of the meeting.

Wike also advised Nigerians not to be carried away by regional and ethnic sentiments during elections, saying the failure of the present administration in all aspects of life has simply demonstrated that what Nigeria needs is a capable leader and not a regional leader.

In his remarks, the Chairman of the Peoples Democratic Party in Kano State, Shehu Shagagi, assured Wike of the votes of Kano delegates during their convention while recalling that Wike stood by them during their troubled times.