Why I Chose Okowa As My Running Mate – Atiku 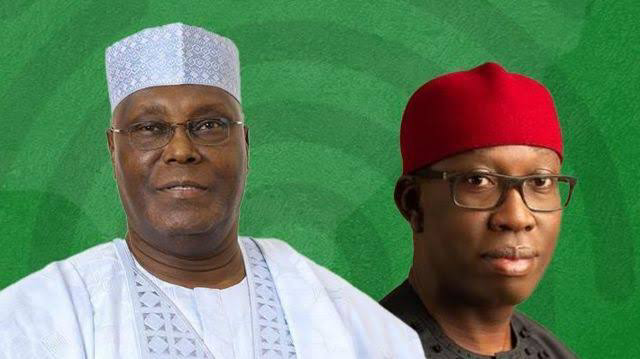 Atiku Abubakar, the presidential candidate of the Peoples Democratic Party (PDP), says he chose Senator Ifeanyi Okowa as his running mate due to the perceived qualities of the Delta State Governor in governance and politics.

Prior to the announcement on Thursday, Atiku explained that it was a tough decision to arrive at his choice of a running mate, one which required wild consultations with various stakeholders.

Atiku said that in his consultations with party stalwarts, he made it clear that his “running mate would have the potential to succeed him at a moment’s notice, i.e a president in waiting”.

According to him, the Governor Okowas possesses the admirable attributes for the position of Vice-President and has the appropriate experiences in both the legislative and executive arms of governance.

Okowa according to Atiku, is someone who will remain part of his everyday life, as they navigate the leading of a complex country such as Nigeria.

“He personifies not only the seriousness the current moment represents for our country but also the future that our young people yearn for and also deserve.

“He’s a serving governor who has demonstrated in his state and through his conduct that governance is about service to the people. I know that he will not only add excitement to our energized campaign but will also help to bring focus, discipline and stability to our government come 2023,” Atiku enunciated before announcing his running mate.

In his opinion, Okowa will help lead the PDP to victory next year not only in the presidential elections but also in the governorship and legislative elections