We need helicopters, drones, others to tackle insecurity on rail routes ― Amaechi 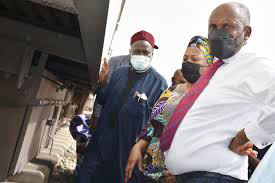 Minister of Transportation, Hon. Chibuike Amaechi has disclosed that early approval of N3bn security surveillance and rail track monitoring equipment could have prevented the attacked on the Abuja – Kaduna bound railway track with about 398 passengers on board that took place on Monday.

The minister said that all over the world, train tracks are monitored with drones, cameras and other high-tech equipment but lamented that due to bureaucracy, the federal government could not procure the necessary equipment that could have given a lead on the attempts on the rail tracks.

Speaking with journalists after an assessment of the damaged track and coaches, Amaechi said, “We have not been able to install the security sensors because the procurement process is a beat difficult. It is typical of Nigerians, the process is tedious, the approval is also tedious, we have not been able to get that approval that will lead to the purchase those items.

“If those items were here, drones alone will tell you that there are people around the rail tracks because there are equipments that pick sensors if you touch the track but unfortunately the process has not been able to get us that approval for us to import those items.

“The cameras in the train cannot pick what is happening outside. What you need is a camera that shows 100 meters away from the train, then we can take precaution but we have done all we need to do in the ministry of transport and we have forward to them for approval but we have not gotten approval.

“The patrol vehicles are available but they cannot reach everywhere. We are thinking about the possibility of employing natives until we get that equipment, we also need helicopters.

“What we need is technology that lets you know that there are human activities or foreign activities on the track, that way you can secure the locomotive and secure lives and I had warned earlier that it is important they get us this approval because human lives would be involved. Since that warning till today, we have had two incidents”.

Commenting on the cost of the equipment which some said is on the high side, Amaechi replied, “No matter the cost, you cannot equate it with the eight lives that were lost. The equipments were just N3billion and we are about to place order for the one in Lagos but we need to know what is happening on the track.

“We don’t want to continue to lose lives because lives are important. If we don’t do that, more persons will die. The cost was about N3billion and the damage here is more than N3billion. So, if we had gotten the approval, we would have spent the N3billion and saved lives” Amaechi lamented.

The minister also disclosed that about eight casualties were recorded while 25 persons in the hospital just as the total number of passengers are 398. The minister however did not disclose the number of persons that were kidnapped and could not confirm if arrests have been made.

Meanwhile The Nigerian Railway Corporation (NRC) has described the situation as unfortunate but said that the incident will not deter them from going ahead with their daily operation.

Although the Corporation has suspended further train services on the Abuja – Kaduna route, it went further to state that the corporation had arranged for security escorts and beefed up security on each train and station with the hoped that it will deter any attempt to tamper with the rail track, coaches and passengers.

Speaking with journalist in a telephone interview, the Managing Director of NRC, Engr. Fidet Okhiria, said, “counter measures we took was to make sure that the trains were properly manned by security agencies, we had escorts on every train has about 16 escorts.

“The government and security agencies were well briefed and on their part also, we got commitment of helicopter coverage and other things and then passengers were also asked to monitor themselves in case there are passengers who may board the train and give information to these bandits

“Some two months back, we got information that some people were carrying out surveillance of the tracks and the information was passed to the relevant authorities and I think some things were done and nothing happened.

“The government is doing its best and on our part, we have done things to install sensors, drones to monitor the tracks and the routes but we going through procurement process and I believe it’s going to be hastened, we would like to thank Nigerians, our passengers and people who patronize us, their families, we would like to offer our condolences, our concern and sympathies, we hope that with God almighty, this thing will never repeats its self again.

“It is not going to deter us, honestly we are not going to give up because of this. The only thing we want is the cooperation of everybody especially people living along the corridor, when they see any suspicious activity, because there is no way that people riding 50-70 motorcycles without anybody seeing them or hearing the noise. I believe people should help us” Okhiria said.

However, there is an unconfirmed report that another train track along the same corridor was attacked shortly after the minister and his entourage re-routed to Abuja at the end of the inspection.