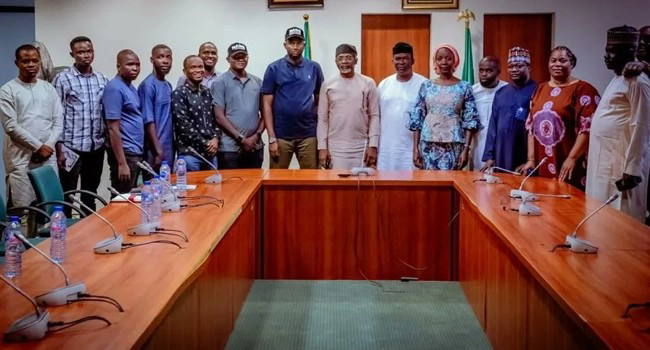 The Speaker of the House of Representatives Femi Gbajabiamila has asked Nigerian youths to vote for those with track records in next year’s general elections.

He made the call on Wednesday when the executive members of the National Association of Nigerian Students (NANS) led by their President Usman Barambu visited him in his office at the National Assembly in Abuja.

“What I want you to do, as is done in advanced democracies, is to look objectively, and this is what is done in other countries, people run on their records,” he told the students who were on a “thank you” visit to him for his role in resolving the eight-month strike of the Academic Staff Union of Universities (ASUU).

“The good thing is that most of the candidates, at least the frontrunners, have records.  I’m not pitching for anybody here but look at their records. If you feel he deserves to be the President of Nigeria, please, do not hesitate. Vote for that person based on his record.

“Two of them have been governors for eight years, that’s the only record they have. One has been the Vice-President for eight years. So there are records, vote for records. Every candidate must run on his record.”

He added: “And I believe the way you have been equipped mentally, I have interacted with so many of you, I believe you’re savvy enough to be able to, in spite of all the noise and the smokescreen, zero in on the right person for Nigeria.

“Also pray, that’s very important. As you consider the candidates, also pray that God will guide you to make the right choice.