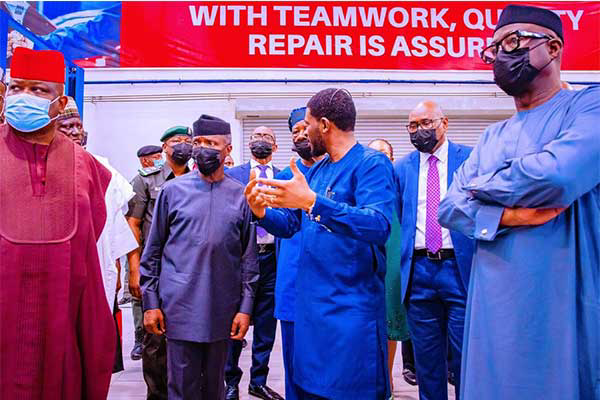 Vice-President Yemi Osinbajo on Monday inaugurated a Toyota-certified service centre in the Oshodi end of the Apapa-Oshodi Expressway Lagos.

The state-of-the-art facility built by Toyota Nigeria Limited is described as a legacy project comprising a standard showroom, a collision repair centre, a general repair workshop with sophisticated equipment and a spare parts warehouse.

Osinbajo said with the level of sophistication and deployment of modern technology at the facility, the centre stands out as a milestone achievement that would contribute immensely to the development of the auto industry and the nation’s economy.

He said, “I must confess to being quite fascinated by the multiple resources and outcomes that this facility possesses and is designed to achieve.

“It is not merely a service centre for providing quality after-sale service (although we are told that is one of the objectives for establishing it), it is actually developed as a teaching, research and resource centre, to provide dealers with world-class, practical hands-on training.”

The VP said the capacity-building aspect of the facility was tallied with a number of skill acquisition and empowerment schemes of the Federal Government for young Nigerians.

“This year also, the Nigeria Jubilee Fellows Programme will begin. Every year under the programme, 20,000 graduates, after their youth service, will be given fully-paid internships that will last for 12 months in reputable private and public sector organisations across the country such as Toyota Nigeria Limited.

According to him, part of the duties of government is to provide the fertile ground and enabling environment for businesses to thrive.

He commended the TNL team led by its chairman, Chief Michael Ade Ojo for the visionary project.

Minister of Industry, Trade and Investment, Otunba Adeniyi Adebayo, said the establishment of the centre showed the commitment of Toyota Nigeria towards addressing the concerns of its consumers.

“Today’s event is a brilliant manifestation of the enabling business environment created by this administration and their unparalleled leadership,” he said.

The minister also said, “Nobody hopes for a collision or looks forward to repairing their car but when these challenges do arise, knowing that there is a place that one can take one’s car to, and it will be operated on by the manufacturer gives consumers peace of mind.”

He reiterated the ministry’s commitment to complementing the efforts of Toyota Nigeria in reviving the auto sector.

Lagos State Governor, Mr Babajide Sanwo-Olu, who was represented by the Secretary to the State Government, Mrs Folasade Jaji, said the establishment of the centre was a clear statement of Toyota Nigeria’s commitment to the continuous growth of the company.

“In addition, the modern technology and equipment available within the facility will boost the technical capability of the local technicians and impact positively on the drive to improve our capacity as a nation in science and technology,” the governor said.

Chairman of the TNL, Chief Michael Ade Ojo described the event as a memorable one that gave him fulfilment.

Managing Director of the TNL, Mr Kunle Ade-Ojo, said following the movement of the corporate headquarters of the TNL to Lekki, Lagos, in 2009, the company decided to convert the old office to a standard after-sale centre.

He said apart from providing quality maintenance service, genuine spare parts and a standard showroom for Toyota vehicles, the facility would serve as a resource place “for market study to gather data on market dynamics and obtain feedback on customers experiences and expectations.”

He said the centre would help in bridging the demand/supply gap for quality after-sale service by vehicle owners in Nigeria.