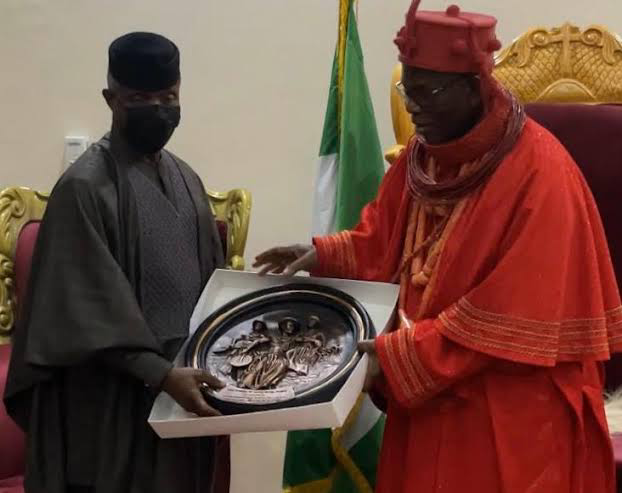 The Vice President, Professor Yemi Osibanjo, has advocated some level of constitutional roles for traditional rulers in the country, adding that monarchs should take steps to sustain  peace in oil communities.

Osibanjo spoke on Saturday during his separate visit to two traditional rulers in the state, the Olu of Warri, His Majesty Ogiame Atuwatse  III, and the Ovie of Uvwie Kingdom, His Royal Majesty, Dr Emmanuel Sideso, at their palace in Warri South and Effurun in Uvwie local government areas, respectively.

The Vice President lauded traditional rulers in the country for their effort in promoting grassroots peace, adding that they had continued to maintain closer touch with the people.

He further enjoined the various monarchs to continue to consolidate the peace in their various areas.

The deputy govenor, Barrister Kingsley Otuaro who accompanied the Vice President during the visit, also spoke extensively on efforts by traditional rulers in the state to maintain peace in their environment.

He added that they should be given constitutional roles to strengthen their efforts.

PREVIOUS POST Some presidential aspirants should be in prison if EFCC, ICPC did their job -Obasanjo
NEXT POST Medical Trip: Osinbajo Will Be In Charge While I Am Away – Buhari