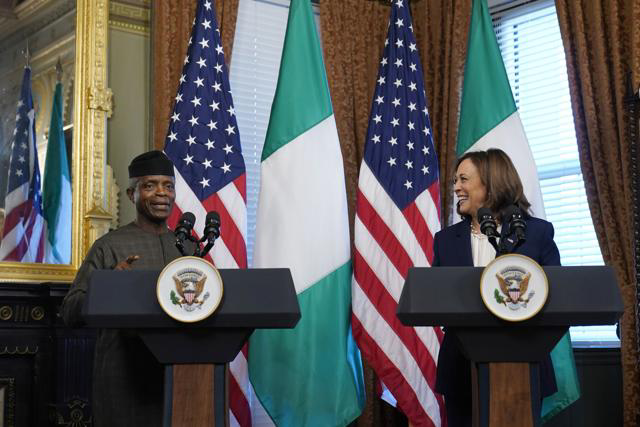 The Vice Presidents also discussed Nigeria’s complex security challenges and affirmed our cooperation to counter terrorism.  Vice President Harris noted the importance of strengthening public trust in law enforcement institutions and highlighted the Biden-Harris Administration’s commitment to support police reform. To that end, she informed Vice President Osinbajo that the Biden-Harris Administration will commit an additional $5 million to support police and criminal justice reform in Nigeria. The two leaders also discussed the deteriorating security environment in the Sahel and agreed to continue to work together to address terrorism in the region.

In support of the United States’ strong bilateral relationship with Nigeria, Vice President Harris shared that the Administration intends to commit up to $627 million in bilateral assistance over the coming year, subject to congressional approval.

And Nigeria, without any question is leading on so many important issues and some of the most important issues of our time. When we look at the issue of the climate crisis. Mr Vice President, you have been an extraordinary leader on this issue and I know this is something that you feel very strongly about and you’ve been very adamant about the role of Nigeria can play in addressing this crisis that faces us all. And I congratulate you for example on your energy transition plan, which I know pledges carbon neutral energy by 2060 ambitious goals but important goals.

And under your leadership, I have no question that they will be achieved Today. We will also discuss the urgent issue that affects uh the continent of Africa and and the world, which is the issue of food insecurity. As you know, the United States has committed $7 billion dollars in food security and humanitarian assistance to African countries over the past year alone. Nigeria has also been an important partner in upholding the international rules based order. Whether it is tackling the democratic backsliding that we’ve been seeing in West Africa or standing up for Ukraine at the United Nations. The United States remains committed to supporting free and fair elections in Nigeria. Next february elections, which we have confidence will be peaceful and reflect the will of the people. And of course we do feel very strongly as I know you do.

Nigeria is and must remain a bastion of democracy for West Africa more broadly, Africa’s leadership is key to confronting all of the global challenges we face. And to that end, Nigeria is key. So we look forward to strengthening our partnership. I bring you greetings from President joe biden. I was just with him and he and I remain committed to strengthening our relationship with Nigeria and with Africa as a continent as a whole. And we also look forward to hosting you in december at the summit here in Washington. So with that welcome again and I look forward to our discussion

Thank you very much grateful. Vice President Kamala Harris for receiving me here at the White House and my visit is an opportunity to reaffirm the close ties that exist between our countries. The United States has been a long standing partner and friend of Nigeria and even as long ago as independence, you know, the United States has been a very firm supporter of all of our aspirations, especially our economic and social development ambitions.

The United States has always been with us. We also must appreciate the firm support that we’ve received from the U. S. Especially in our fight against terrorism within our borders and in this hell. And of course the very timely donation of vaccines, four million vaccines as we battled the COVID-19 pandemic and that of course it’s extremely useful.

But in addition as you pointed out, our shared commitment to democracy and the international rules based system, we very strongly believe that, you know, in the coming years we will need to work together again on so many global challenges. And there are as varied and as if they come up very frequently now from promoting peace and security to tackling global health issues and climate change. And of course economic adversity. I must also congratulate you of course on the inflation reduction act. And I think in particular its historic, especially for those of us who are paying attention to all the issues on climate change.

The climate change component is really ambitious and we think that it shows us leadership in this in the area of climate change and we’re all excited to queue up behind the US and see that we get uh many of these objectives on the way on our part. And you pointed this out already, the Nigerian Government launched uh energy transition plan just last week. This plan is important for us because for us we see Energy especially the climate crisis as to existential issues.

One of course, the crisis the second is the energy poverty and the energy crisis for us in our part of the world. So while we look forward to uh 2060 carbon neutrality goal, we’re also hoping that within that period, even within a shorter period, we’re actually looking at 2030 will deal with issues of energy poverty. And so we’re anxious to get all the support we can. And in the last few days, I’ve been talking to quite a few of the agencies here in the World Bank usA in fact, the Treasury Secretary yesterday also. And they’ve all been very positive, you know, and shown indications that they will be very helpful indeed.

So I think that we look forward to in the common years and months to even greater collaboration and stronger ties between our countries to create a fairer, more prosperous and perhaps a greener also freer nation and nations and the world, you know, thank you very much again for hosting me. And this is a great honor indeed. Thank you. Thank you.