US, UK Warn Of Possible Terror Attack In Abuja, DSS Calls For Calm 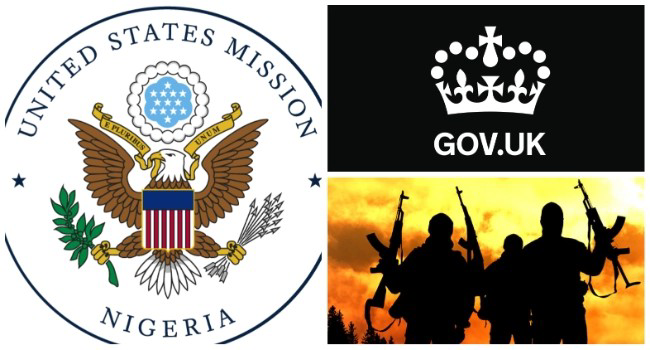 The United States and Britain have warned of a possible terrorist attack in Abuja, the nation’s Federal Capital Territory (FCT).

According to the warnings on Sunday, the attack would be especially aimed at government buildings, places of worship, schools and other centres where large crowds gather.

In its brief communique, the U.S. Embassy in Nigeria said “there is an elevated risk of terror attacks in Nigeria, specifically Abuja” and added that shopping malls, law enforcement facilities and international organisations were among places at risk.

“The U.S. Embassy will offer reduced services until further notice”.

Similarly, the United Kingdom in its foreign travel advice urged Nigerians to be on the look out, as the terror groups operating within the country are looking to carry out an assaults in the nation’s capital.

According to the advisory, “Terrorists are very likely to try to carry out attacks in Nigeria. Attacks could be indiscriminate and could affect western interests, as well as places visited by tourists.”

Following the July raid on Kuje Prison by members of the Boko Haram and Islamic State terror groups, there have been serious concerns that many of the terrorists who were part of the 440 inmates that escaped on the night, might still be within Abuja and its environs.

However, the Department of State Services (DSS) has urged residents of the Abuja metropolis and Nigerians in general to remain calm, saying the security agencies are right on top of the situation.

“DSS has received several enquiries relating to the security advisory issued by the US Embassy in Abuja, today, 23/10/22.

“The public may recall that the Service had variously issued similar warnings in the past.

“While advising that necessary precautions are taken by all and sundry, the populace is enjoined to remain alert and assist security agencies with useful information regarding threats and suspicious criminal acts around them,” a DSS statement partly read.

The Service through its spokesman, Peter Afunanya, further called for calm even as it works with other law enforcement agencies and stakeholders to maintain peace and order in and beyond Abuja.