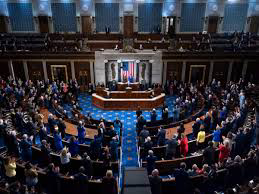 US lawmakers have passed a bill that would make lynching a federal hate crime, after more than a century of failed attempts to introduce such legislation.

The bill is named after Emmett Till, an African-American teenager whose brutal killing galvanized the US civil rights movement in the 1950s.

The Senate voted unanimously on Monday to pass the bill, which will now be sent to President Joe Biden to be signed into law.

The maximum sentence under the law will be 30 years.

“This is an important step, but that it’s taken so long is a stain on America,” he tweeted.

Till, a 14-year-old from Chicago, was abducted and murdered in August 1955 while visiting relatives in the southern state of Mississippi.

His mutilated body was found three days later in a local river.

Till’s mother famously insisted that her son’s remains be displayed in an open casket to show the world what had been done to her boy.

Till was murdered several days after a white woman, Carolyn Bryant, alleged that he had propositioned her in a store and touched her on the arm, hand and waist.

The pair later admitted in a magazine interview that they had killed the boy.

The Justice Department re-opened its probe into Till’s murder in 2018 after Carolyn Bryant, now known as Carolyn Donham, had recanted portions of her testimony in interviews with an author of a book on the case.

But the Justice Department said Donham “denied to the FBI that she ever recanted her testimony and provided no information beyond what was uncovered during the previous federal investigation.”

In December, the department ended its investigation into the murder.

“The government’s re-investigation found no new evidence suggesting that either the woman or any other living person was involved in Till’s abduction and murder,” it said.

Democratic Senator Cory Booker, who introduced legislation to make lynching a federal crime in 2018, said Monday that lynching was “a shameful instrument of terror used to intimidate and oppress Black Americans.”

“This legislation is a necessary step America must take to heal from the racialized violence that has permeated its history,” his statement read.