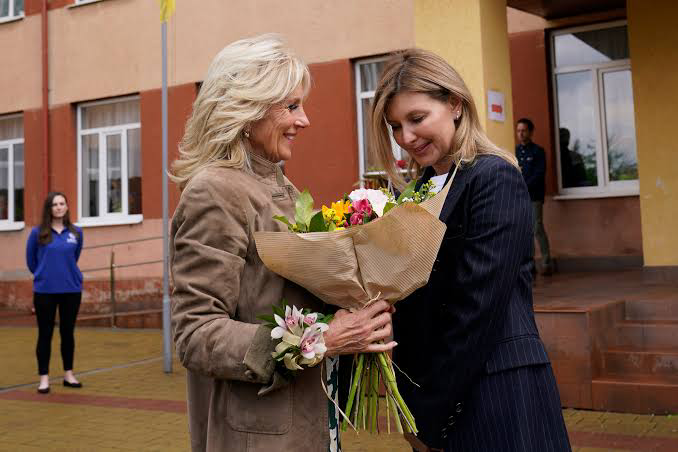 US first lady Jill Biden made an unannounced visit to western Ukraine on Sunday, holding a surprise Mother’s Day meeting with the nation’s first lady, Olena Zelenskiy, as Russia presses its punishing war in the eastern regions.

US president Joe Biden has not visited the country, though he expressed a desire to when he was in Poland this spring, following Russia’s invasion in February, but at that time Russian tanks were advancing on the capital, Kyiv, and he hinted that his security advisers held him back.

Jill Biden traveled under the cloak of secrecy, becoming the latest high-profile American to enter Ukraine during its 10-week-old conflict with Russia.

Russian forces drew back from Kyiv in the weeks after Biden’s trip to Poland, and the return of a greater level of security in the capital prompted visits by House Speaker Nancy Pelosi, days after US secretary of state Antony Blinken and defense secretary Lloyd Austin, and other world leaders, including British prime minister Boris Johnson, had met there with Ukrainian president Volodymyr Zelenskiy.

The first lady traveled by vehicle to the town of Uzhhorod, about a 10-minute drive from a Slovakian village that borders Ukraine.

The two came together in a small classroom, sitting across a table from one another and talking in front of reporters before they met in private. Zelenskiy and her children have been at an undisclosed location for their safety.

Zelenskiy thanked Biden for her “courageous act” and said: “We understand what it takes for the US first lady to come here during a war when military actions are taking place every day, where the air sirens are happening every day – even today.”

The school where they met has been turned into transitional housing for Ukrainian migrants from elsewhere in the country.

The visit allowed Biden to conduct the kind of personal diplomacy that her husband would like to be doing himself.

The White House said as recently as last week that the US president “would love to visit” but there were no plans for him to do so at this time.

Her visit was limited to western Ukraine. Russia is concentrating its military power in eastern Ukraine, and she was not deemed to be in harm’s way.

Earlier, in the Slovakian border village of Vysne Nemecke, she toured its border processing facility, surveying operations set up by the United Nations and other relief organizations to assist Ukrainians seeking refuge. Biden attended a religious service in a tent set up as a chapel, where a priest intoned: “We pray for the people of Ukraine.”

Before that, in Kosice, Biden met and offered support to Ukrainian mothers in Slovakia who have been displaced by Russia’s war and assuring them that the “hearts of the American people” are behind them.

At a bus station in the city that is now a 24-hour refugee processing center, Biden found herself in an extended conversation with a Ukrainian woman who said she struggles to explain the war to her three children because she cannot understand it herself.

“I cannot explain because I don’t know myself and I’m a teacher,” Victorie Kutocha, who had her arms around her 7-year-old daughter, Yulie, told Biden.

At one point, Kutocha asked, “Why?” seeming to seek an explanation for Russia’s decision to invade Ukraine on Feb. 24.

“It’s so hard to understand,” the first lady replied.

PREVIOUS POST Entrepreneurship is one of the ways we can develop Africa”: Tony Elumelu
NEXT POST Reps to Meet Aviation Stakeholders On Monday