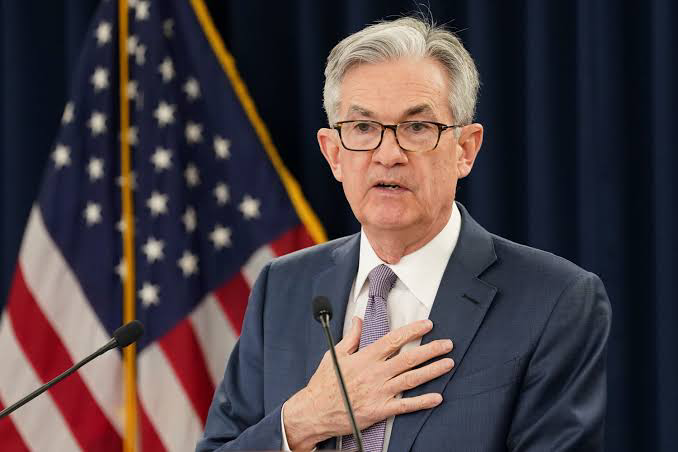 The Federal Reserve responded to the nation’s surging inflation Wednesday by inching up interest rates by a quarter of a percentage point and signaling it plans more hikes in the months to come.

It was the Fed’s first increase since 2018 and will lift the central bank’s benchmark rate from near zero, where it has been the last two years of the pandemic.

But with consumer prices accelerating at a 40-year high and hitting American household budgets with painful and unsettling effects, economists decried the central bank’s action as too little, too late.

“The Fed is so far behind the curve, it’s a little exasperating,” said Dan North, chief economist at the trade credit insurer Euler Hermes.

“We don’t have the luxury of 20/20 hindsight,” he said, adding that the Fed is committed to controlling inflation and will do all it can to achieve that.

“We’re acutely aware of the need to restore price stability while keeping a strong labor market,” he said.

But Powell and his colleagues face a challenge much like that of an airplane pilot flying through dense clouds with instruments that are hard to read.

Not that long ago, rising inflation looked like an unwelcome byproduct of the COVID-19 pandemic that could be reined in with moderate application of higher interest rates. The Fed took a wait-and-see approach, thinking that the pandemic had scrambled supply chains and created other problems that would sort themselves out fairly quickly.

They didn’t. And then Russian President Vladimir Putin attacked Ukraine.

The invasion of Ukraine, with its threat of a wider war and disruption of supplies of oil, grains and other raw materials, has thrown a big wild card into the economic outlook.

“The uncertainty is great when you look at what could happen. Could this crisis [in Ukraine] spread to other regions? How long will it last? Will it get worse?” asked Beth Ann Bovino, chief U.S. economist at S&P Global Ratings.

For now, Bovino said, most American households and companies are in relatively good financial shape. She estimated that consumers still have $2.5 trillion more in savings compared with what they had in 2019, thanks to wage gains, federal stimulus and money they didn’t spend because of the pandemic.

Also, unlike Europe, the U.S. economy is largely self-sufficient. It’s a top producer of energy and other commodities, even if Americans have to pay more for them because of their international pricing. S&P Global still sees U.S. economic growth at an above-potential rate of about 3% for this year — similar to the Fed’s new economic projection released Wednesday.

Powell characterized the economy as strong, noting particularly the solid job market, and said he wasn’t concerned about a recession occurring within the next year.

“All signs are that this is a strong economy, indeed one that will be able to flourish, not to say withstand but certainly flourish as well, in the face of less accommodative monetary policy.”

Even so, consumer sentiment toward the economy has fallen to as low as it was during the Great Recession in 2008-09. And some measures of long-term inflation expectations — a key factor in whether higher prices could become entrenched — have risen to uncomfortably high levels.

What’s more, Powell said the war in Ukraine was likely to put more upward pressure on prices. Consumer prices have been climbing for nearly a year and were up at a 7.9% annual rate in February, the highest since 1982.

The rate of inflation isn’t likely to trend down until the second half of the year, Powell said, and even then, Fed officials now see their preferred gauge of price changes finishing the year up 4.3%. Just last December, they predicted the annual rate of inflation would be just 2.6% in this year’s fourth quarter.

In response, Fed policymakers on average expect to make seven quarter-point rate increases this year — which means one at each of its next six scheduled meetings — and several more in 2023.

But counting Wednesday’s quarter-point boost, the rate the Fed charges banks for short-term loans — which forms the basis for other interest rates in the economy — now stands at only 0.25% to 0.5%, and is expected to end the year at less than 2%, still low by historical standards.

One Fed policymaker, James Bullard, president of the St. Louis Fed, dissented with the policy decision Wednesday, saying he preferred to have raised rates by half a percentage point.

Fed officials have been slow to raise interest rates as they put more weight on maximizing employment, the central bank’s other mandate along with ensuring stable prices. Before last year, annual inflation had been consistently at about 2% or lower over the last decade.

If Powell and his colleagues do too little to combat inflation, prices could run out of control for years to come, eroding people’s purchasing power and standard of living. Average wages rose strongly last year but were swamped by inflation.

On the other hand, if policymakers step on the brakes too hard, they could drive the economy into a state of stagnation accompanied by high prices, a condition known as stagflation, which is what happened in the late 1970s and early ‘80s.

“The idea that they’re going to be able to stop raising interest rates at just the right point, not too early, not too late — the odds are against them,” said Greg McBride, chief financial analyst at Bankrate.

He advised consumers to pay off or consolidate debt and consider signing up for zero-interest balance transfers and switching to online banks that generally pay higher interest rate on savings.

McBride said history is not on the Fed’s side. The U.S. emerged from the stagflation of the 1970s only after then-Fed Chair Paul Volcker jacked up interest rates into double digits and the economy endured a deep, double-dip recession in the early 1980s.

Oil shocks in the 1970s, reflecting geopolitical tensions, added inflationary pressures, just as today. The invasion by Russia, which is the world’s No. 2 oil exporter, has led to skyrocketing gas prices. Ukraine and Russia are big producers of wheat, corn, precious metals and other commodities, the prices of which also have taken off.

During the pandemic, snarled supply chains fueled higher prices as transportation costs surged and stores couldn’t keep up with unusually strong demand for goods from stuck-at-home consumers. The war in Ukraine, plus the news this week that a return of COVID cases in China had triggered lockdowns in some key areas, is likely to delay a recovery of supply chains.

But if the Fed now finds itself in a bind, many analysts say it has itself largely to blame. For months when inflation was rising, Powell and his colleagues insisted that the trend was transitory even as some economists warned that massive fiscal and monetary pandemic support would lead to overheated demand and higher inflation.

Ethan Harris, head of global economics research at Bank of America Merrill Lynch, said the Fed should have begun raising interest rates by last fall, when it became clear that consumer prices were rising broadly, not just for volatile energy and food, and that the unemployment rate was shrinking fast. The jobless figure went from 6% in April to 4.2% in November, and in February dropped further to 3.8%.

The Fed under Powell kept rates at rock bottom and flooded the economy with more money by buying massive amounts of bonds to spur growth and employment gains for disadvantaged workers, who are typically last to benefit from a recovery.

Noble as the effort was, Harris said, if the Fed now has to fight inflation by raising rates and even pushing the economy into recession — something that Powell said he would do if necessary — the result will be worst for those with low skills, minorities and other disadvantaged workers. In economic downturns, they’re almost always the first and hardest hit.

Harris and other economists are particularly worried that a wage-price spiral may have already begun to take hold. If workers are convinced that inflation will be high in the years ahead, they’ll demand higher wages. That will raise costs for companies, which in turn will pass them on to consumers, creating a feedback loop that’s hard to break.

“The Fed has started to acknowledge they’re behind the curve and they need to hike,” Harris said.

Will they do enough and yet avert a recession? “I think it’s a close call,” he said.