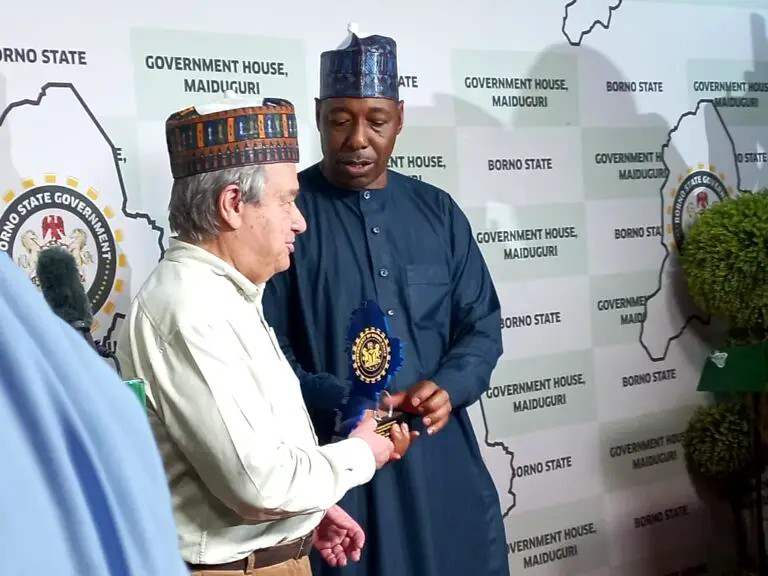 U.N. Secretary-General Antonio Guterres, at the start of a two-day visit to Nigeria, is in northeast Borno state, where the country has been struggling in its fight against Islamist militants.

The United Nations information center in Nigeria said the Secretary General is expected to meet with the Borno state governor, Babagana Zulum in Maiduguri, the state capital before embarking on a field mission where he will meet families affected by the Boko Haram conflict ravaging the region for more than twelve years.

The center said he will also evaluate the impact of climate change on vulnerable communities and assess progress made as well as the challenges to the COVID-19 recovery.

Speaking on his visit and what he made of the situation he met on the ground, the UN secretary-general said his coming to the front line state symbolises the international community’s commitment to ending terrorism and building peace.

“The fact that I came to Borno state is symbolic of our priority to fight terrorism in the world and to create solutions for the victims of terrorism,” he said.

He said a substantial part of what he used to read during his time as UN High Commissioner on Refugees “was a Borno state of terrorism, displacement and violence.”

“This is not the Borno I found today. I found a Borno of hope; a Borno with a future.

“And the policy of the governor aiming at establishing fully the confidence between the people and the government is an essential element that could be implemented in reality.

“It is essential that in situations like this, it is not enough to even provide basic assistance. But the people I met today want more than that.

“They want to go back to safety and dignity. When one looks at the state we have to understand the root cause.

“And to address terrorism effectively, we have to collectively provide not only hope but a future of reality,  which is to invest in livelihood, to invest in the reintegration of those that in the past have been recruited into terrorism by Boko Haram.

“I was amazed to see today in the centre those that have been terrorists now want to be in the society; they want to contribute to the society.

“This is a laudable policy you have here; a policy of reconciliation, a policy of reintegration, policy aimed with development perspective to allow for terrorism to be eliminated so that the people are able to construct their future in confidence.

“I want to congratulate the governor, Professor Babagana Zulum for what I have seen here and I Want to strongly appeal to the international community to understand Borno as a state of hope.

“To support humanitarian action in Borno; we must recognise the humanitarian challenges Borno face – climate change, Boko Haram, and invest in the Borno of hope.

“To provide support to the project of the government of Borno, to the civil society in Borno in order to create a safe society for real development in which schools work, hospitals work and people can live in peace and in solidarity.

“So, I will be your advocate Mr Governor within the international to support and invest in the Borno of hope.” Said the UN Leader.

Earlier while on a courtesy call on the governor at the council chambers, Zulum thanked the UN Leader for finding time to visit Borno and assessed the humanitarian crisis posed by insurgents in the last 13 years.

He appealed to the UN Leader to continue to support Borno in its reconstruction, rehabilitation and resettlement processes, as well as the reintegration of thousands of repentant Boko Haram terrorists back into the society.

He also requested support for the recharging of the Lake Chad Basin which provides means of livelihood to millions of people in the state.

“My most important call on you is to be our champion and advocate for the Lake Chad region, this is because the region is one of the areas where there are many potentials to end the devastating human sufferings and waste of human lives and build back communities with livelihood and dignity,” Zulum stated.

Guterres will then head to Nigeria’s capital to meet with President Muhammadu Buhari and Vice President Yemi Osibanjo and other top cabinet officials.

In Abuja, Guterres is expected to officiate a wreath-laying ceremony for victims of the 2011 bombing at the U.N. house and will then meet with young people’s delegates, women, religious leaders and diplomatic communities and journalists.

It is the first visit by the U.N. secretary-general to Nigeria since his appointment. The visit is part of his annual Ramadan solidarity visits to nations.

But this year, Guterres is focusing on countries affected by terrorism and also highlighting the impact of the Russia-Ukraine war on the African continent.

Before arriving in Nigeria, Guterres already visited Senegal and Niger.