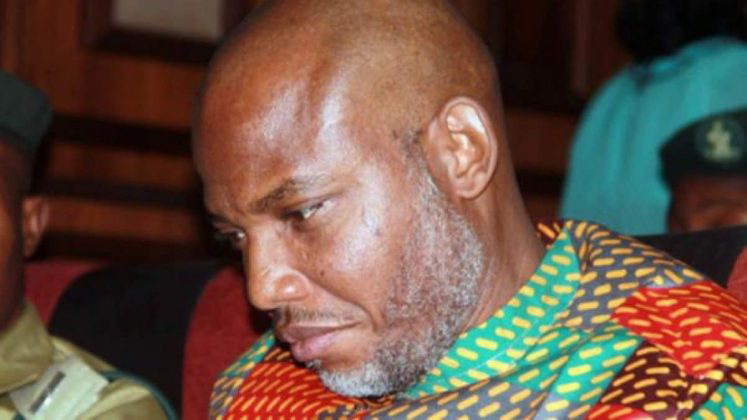 The United Nations has asked the Nigerian Government to, “immediate release unconditionally” from detention, leader of the Indigenous People of Biafra (IPOB), Nnamdi Kanu.

The directive followed an indictment of both Nigeria and Kenya Governments by the UN Human Rights Council Working Group on Arbitrary Detention, for the arrest and extraordinary rendition, torture, and continued detention of Kanu, without due process.

The Working Group on Arbitrary Detention was established in resolution 1991/42 of the UN Commission on Human Rights.

the IPOB leader is currently facing treasonable charges preferred against him by the Federal Government of Nigeria in a Federal High Court sitting in Abuja.

According to a document from the United Nations Human Rights Council’s Working Group on Arbitrary Detention, the UN has called on the Nigerian Government to, “immediately release Kanu unconditionally” and pay him adequate compensation for the arbitrary violation of his fundamental human rights.

Demanding that its order be complied with within six months, the UN also recommended that Government officials responsible for the torture meted out to the IPOB Leader be investigated and punished,

The UN body further directed Nigeria to report back within six months of the transmission of its opinions on Kanu’s matter, steps taken to comply with all the recommendations thereof.

It referred the case of Kanu’s torture to Special Rapporteur on torture and other cruel, inhuman, or degrading treatment or punishment for further consideration.

The UN Working Group also threatened to take further action to ensure the recommendations are complied with, noting that both Nigeria and Kenya are signatories to the Convention.