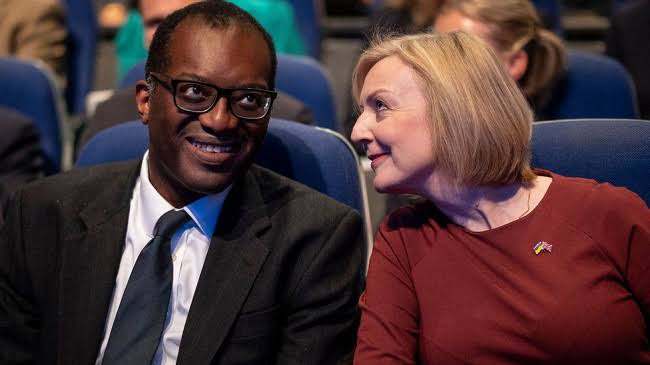 British Chancellor of the Exchequer Kwasi Kwarteng is out as Prime Minister Liz Truss announced a reversal on business tax cuts in a press conference Friday. Truss asked Kwarteng to resign.

Truss said in a Downing Street press conference Friday that she is reversing corporate tax cuts.

“It is clear that parts of the mini-budget went further and faster than markets were expecting. So the way we are delivering our mission right now has to change,” Truss said as she scrapped the proposed corporate tax cuts. “We need to act now to reassure the markets of our fiscal discipline. I have therefore decided to keep the increase in corporation tax that was planned by the previous government.”

In his resignation letter to Truss Kwarteng said, “You have asked me to stand aside as your Chancellor. I have accepted… However, your vision of optimism, growth and change was right.”

Kwarteng’s letter said for too long Britain has been “dogged by low growth rates and high taxation — that must change if the country is to succeed.”

“I know that you will continue to support the mission that we share to deliver a low tax, high wage, high growth economy that can transform the prosperity of our country for generations to come,” she wrote.

On Thursday the British government was denying that it would do a U-turn on Truss’ nearly $50 billion in unfunded corporate tax cuts amid economic fallout and high inflation.

Truss’ big tax cut proposal triggered turmoil in British markets and created political backlash against it. Truss already backpedaled on a plan to eliminate the top 45% income tax rate for earnings above $168,000.