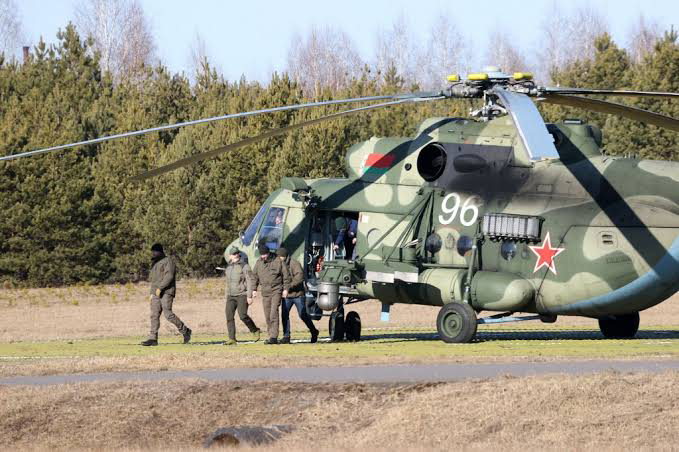 Ukraine demanded an immediate Russian ceasefire and troop withdrawal on Monday as its delegation arrived in Belarus for talks with Russian negotiators on the fifth day of the Kremlin’s offensive.

Ukraine’s delegation was set to meet Russian representatives for the first talks since Moscow’s invasion, as the fighting for several Ukrainian cities continued and the Russian ruble collapsed.

The meeting was set to take place just across the border in neighboring Belarus, a key Kremlin ally that has allowed Russian troops passage to attack Ukraine.

“The Ukrainian delegation arrived at the Ukrainian-Belarusian border to take part in talks with representatives of the Russian Federation,” the Ukrainian presidency said in a statement.

“The key issue of the talks is an immediate ceasefire and the withdrawal of troops from Ukraine,” the statement said.

Russian delegate Leonid Slutsky, the head of the Russian parliament’s international affairs committee, wrote on the Telegram messenger service: “We will start soon.”

The talks come as Ukraine’s forces fiercely resist the Russian offensive, and a day after President Vladimir Putin ordered his defense chiefs to put the country’s nuclear forces on high alert.

Zelensky has said he is skeptical about the possibility of a breakthrough.

Zelensky also called on the European Union to give Ukraine “immediate” membership, via a special procedure.

“Our goal is to be together with all Europeans and, most importantly, to be on an equal footing. I’m sure it’s fair. I’m sure it’s possible,” the 44-year-old leader said in a video address.

Zelensky urged Russian soldiers to lay down their weapons.

He claimed that more than 4,500 Russian soldiers had already lost their lives during the Kremlin’s assault. Russia has admitted to deaths and casualties but given no toll.

Zelensky said 16 children had died during the first four days of Moscow’s assault and another 45 were wounded as he hailed “Ukrainian heroes.”

The UN’s human rights chief, Michelle Bachelet, said Monday that at least 102 civilians, including seven children, had been killed but warned the real numbers were probably far higher.

The Ukrainian leader also said authorities would release convicts with combat experience so that they could help defend the country.

Kyiv was initially reluctant to send a delegation to Belarus, given the country’s role as facilitator in Russia’s attack on Ukraine. In addition, Belarusians voted Monday to allow the country to host nuclear weapons and Russian forces permanently part of a package of constitutional reforms that also extended the rule of leader Alexander Lukashenko.

Rather than facilitating peace, reports said Monday, Belarus is planning on joining the Russian offensive.

An unnamed Ukrainian government official told the outlet that this would be “in addition” to the current situation whereby Russian troops are using Belarus as a staging post and crossing the territory to enter Ukraine.

A second source, said by CNN to be close to Ukraine’s government, said the US has also told Kyiv that Belarus is making preparations to invade.

The UK Times newspaper reported Sunday that Putin has brought in hundreds of Russian mercenaries tasked with taking out Ukraine’s leaders.

Some 400 mercenaries from the shadowy Wagner Group private militia were flown from Africa to Ukraine with instructions to kill Zelensky, the report said.A hit list includes Zelensky and 23 other government figures.

Among other targets are Ukraine’s prime minister, the entire cabinet, and mayor of Kyiv Vitali Klitschko and his brother Wladimir. They are reportedly tracking Zelensky and others via their cellphones and claim to know their exact locations.

A source said the mission has been paused during the peace talks. However, the mercenaries were reportedly told that Putin has no intention of reaching an agreement with Zelensky.

The Ukrainian government found out about the plans on Saturday morning, prompting Kyiv authorities to impose a 36-hour curfew on the city as soldiers searched for what they described as Russian saboteurs.

Zelensky has openly declared he is the target of Russian special forces but rejected a US offer to be pulled out of Kyiv.

The report said the mercenaries are being offered a large sum of money to complete the mission.

They were brought in five weeks ago and are waiting for the order to begin attacks, the report said, with sources telling the newspaper that the Wagner group was informed of Putin’s plan to invade Ukraine even before the Russian army was.

Another source told the Times that 2,000-4,000 Wagner group members arrived in Ukraine in January but they have been given different missions. Some were deployed in the separatist regions of Donetsk and Luhansk along the eastern border with Russia.

Although private military companies are illegal in Russia, Wagner has in recent years played an increasingly important role in buttressing and realizing the Kremlin’s ambitions abroad, observers say.Do you value