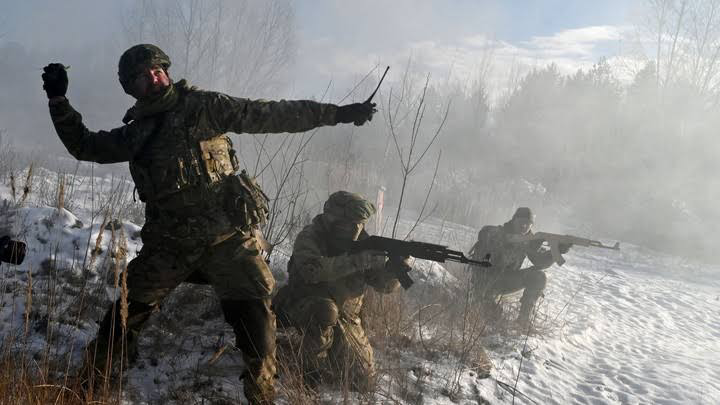 RUSSIAN forces have reportedly reached the edge of Kyiv as civilians were urged to take up arms and make Molotov cocktails.

Ukrainian defence officials said “the enemy” were in the district of Obolon – which is around 5 and a half miles north of the city centre.

The defence ministry urged people to take up arms, make Molotov cocktail fire bombs, and to use commercial drones in the defence of Kyiv.

Some 10,000 guns have been handed out to residents and general mobilisation has been ordered in a bid to protect their homes.

Unconfirmed videos on social media showed gunfire being heard over the city an military vehicles of unknown affiliation moving through Obolon.

And there have been reporters a car has been crushed by a car in Obolon.

Associated Press reporters also said there was gunfire heard in the government quarter in central Kyiv.

The attackers may have been Russian “saboteurs” or “sleeper cells” who are loyal to Putin and who have been lying in wait in Ukraine for the assault.

Meanwhile, the bulk of the Russian invasion force is believed to be around 20 miles away as they roll south.

Last night, a Russian jet was reportedly been shot down in a fireball over Kyiv as Vladimir Putin prepares to besiege the city of 2.9million people.

Ukrainians have been warned they now face their “hardest day” with an expected all out offensive by the Russians.

At least 137 Ukrainians are already dead across the country at the hands of Putin’s forces after the assault began at 3.30am on Thursday.

Kyiv faces an uncertain future as the country comes under attack from air, land and sea by Russia.

US intelligence now fears Putin could topple the Kyiv in just 96 hours as Russian forces move within just 20 miles after seizing nearby Chernobyl.