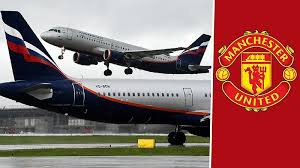 Manchester United have ended their deal with club sponsor Aeroflot as a result of the growing crisis in Ukraine.

The club announced on Friday they had withdrawn the airline’s sponsorship rights following the Russian invasion of its neighbouring country.

It comes after Prime Minister Boris Johnson banned the company, which is majority owned by the Russian Federation.

What has been said?

A statement from a Manchester United spokesperson issued on Friday said: “In light of events in Ukraine, we have withdrawn Aeroflot’s sponsorship rights. We share the concerns of our fans around the world and extend our sympathies to those affected.”

Why have they made that decision?

The club has been under pressure to end their relationship with the Russian-owned airline since the country invaded Ukraine earlier this week.

Russia has begun a large-scale advance on its Eastern European neighbour, with military convoys entering Ukrainian soil on the orders of president Vladimir Putin.

Man Utd made the decision not to fly with the company for their Champions League away trip to Madrid on Tuesday and confirmed early on Friday afternoon that they had terminated their contract.

The airline had been United’s ‘official carrier’ partner since 2013 and they extended the deal in 2017 for a fee believed to be in the region of £40m.

Earlier, UEFA confirmed the Champions League final would no longer be held in Russia. The May finale was set to be held in Saint Petersburg but the decision has been made to change the venue to Stade de France in Paris.

What has Rangnick said?

The Manchester United manager condemned the violence in Ukraine when he was asked about the conflict in his pre-match press conference.

He said: “The situation is desperately sad, I think everybody will think similarly about that, it’s just an incredible situation that we have a kind of war in Europe.”

Having spent time living in Russia during his career he was asked further if he had spoken to anyone over there.

“When I watch TV in the morning and the evening I still cannot believe what I see. This is just a terrible situation and I very much hope the politicians all over the world deescalate the situation and finish those kind of things that are happening there.”