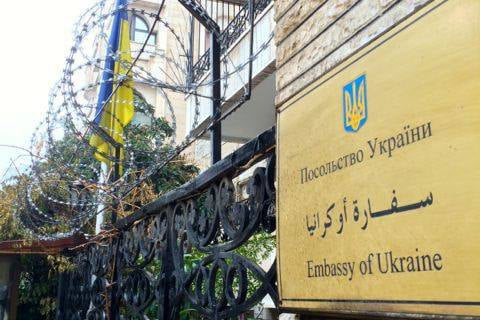 The Embassy of Ukraine in Nigeria says Nigerians who are willing to travel to Ukraine to fight Russian forces must be willing to provide $1,000 for ticket and visa.

The embassy stated this when scores of Nigerian men converged on its premises in Abuja on Thursday to express their readiness to join the Ukrainian side.

In an interview with our correspondent, the Second Secretary at the Ukrainian Embassy to Nigeria, Bohdan Soltys, confirmed that $1,000 would be needed by Nigerian volunteers.

The announcement did not go down well with the Nigerians who lamented that the price was too high.

“The $1,000 requirement is too high,” said Monday Adikwu, with number 96NA/41/2808, who was dismissed from the Nigerian Army for leaving his duty post to visit his pregnant wife without permission.

“They said we should provide evidence of military experience, passports and $1,000 for tickets and others. When I asked what the salary is, the guy first said $7,000 and later changed it to $3,300 per month. I showed him my military and training certificates.”

When asked why he wants to go to Ukraine, Adikwu said he needed money to take care of his family including six children

He said, “I want to go to Ukraine because I am a military man. I fought in Liberia. I fought in Sierra Leone. I was part of the 33 Battalion. I was trained by Ukrainian soldiers when I was in the United Nations in Kosovo on how to shoot and drive APC tanks. I can drive it very well.

“So, when I heard about Ukraine and the way people are trooping in… I am a farmer. I don’t have anything. I am a fighter. They said they will pay us so I am ready to fight so that I can get paid and take care of my family. I will also bring glory to the name of Nigeria as a worthy ambassador.”

Adikwu, who was accompanied by other dismissed soldiers, said they were not afraid of Russian forces.

“We are not scared. It was David that killed Goliath with only a tool. So, I believe my going to Ukraine will give them victory

Another applicant, Nkem Ndueche, who is from Anambra State, said he was fluent in Russian having attended a Russian military academy in 2007, said he was willing to fight on the side of Ukraine.

Ndueche added that his wife was against him travelling to fight for Ukraine but he would travel nonetheless for the sake of honour.

“I am 101 per cent to fight for Ukraine. It is wrong for someone to invade another person’s land. That is what Putin is doing and we want to defend Ukraine. I was in the military academy in Russia. I have what it takes. I even served the Nigerian Army briefly too,” he said.

In an interview with The PUNCH, the Second Secretary at the Ukrainian Embassy to Nigeria, Bohdan Soltys, said it would be difficult for Nigerians to travel to Ukraine now since the airspace had been shut due to the war.

He said since Nigerians needed visas to visit Romania and Poland, it would be difficult for them to use the land borders.

“It is normal practice when people want to volunteer and join the army of another country. It is a normal international practice. Of course, for us, it is an expression of support which we really appreciate. For now, no one has gone. We have received hundreds of applications from people who said they are willing. We have sent lists to the government but I cannot tell you what will happen next.

The diplomat said Ukraine was not recruiting mercenaries but volunteers. He, therefore, advised Nigerians not to focus on the money. He, however, promised that Nigerian volunteers would be paid the same as Ukrainian soldiers.

“If a person wants to fight for Ukraine or any other country, only volunteers can do it. If Ukraine pays these people, they will be mercenaries and it violates international law… In general, when a person joins another country’s army, they pay the normal price that their soldiers are paid. This is how it works across the world. You come to fight because an injustice has been done,” he said

On why $1,000 was being demanded from Nigerian volunteers, the Ukrainian diplomat said, “Yes, $1,000. That is what I paid the last time I visited Ukraine.”

While thanking Nigeria for siding with Ukraine at the United Nations General Assembly, he pleaded with Nigerian citizens who may have been victims of racism during the evacuation in Ukraine not to feel offended, adding that war situations sometimes force people to act out of character.

He, however, advised Nigerians also not to fall for Russian propaganda.