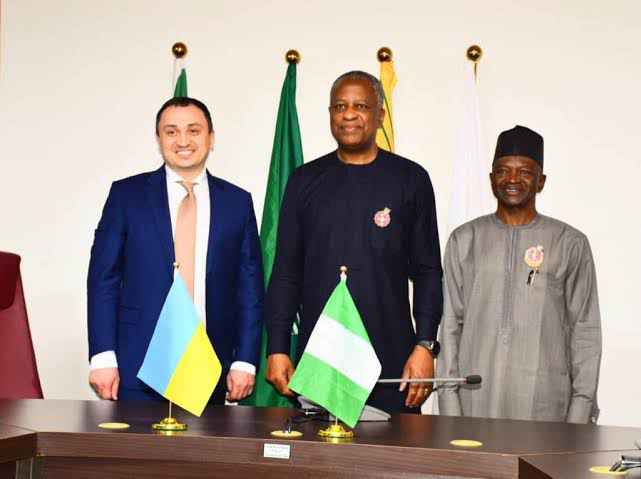 The Ukrainian government, still engaged in war with Russia, has expressed its readiness to establish grain hubs in Nigeria and other African countries even as it has donated about 25,000 tons of grains to Nigeria to boost bilateral ties.

This was revealed on Wednesday when Ukrainian Minister of Agrarian Policy and Food, Mykola Solskyi, led a delegation to a discussion with Nigeria’s Minister of Foreign Affairs, Geoffrey Onyeama and the Minister of Agriculture and Rural Development Mohammad Abubakar in Abuja.

Speaking during the meeting, Onyeama, who expressed sympathy for Ukraine over its ongoing war with Russia, also lauded it for the grain donation, adding that the gesture was coming even when the country is still at war.

He said: “Notwithstanding the situation in which your country finds itself, you are able to reach out a hand of friendship not just to Nigeria but to other African countries. This demonstrates superhuman courage and we really admire your generosity, we thank you for this support.”

Onyeama noted that Nigeria has a long-standing relationship with Ukraine, and lamented that some of the victims of the war in Ukraine are large number of Nigerian students, whose studies have been interrupted by the war.

The Minister said: “You have built up real specialization in many disciplines and Nigerian students are the beneficiaries. We can continue to strengthen relations between our two countries and our two peoples. We will do our best at the multilateral level to bring the war to a very quick end.”

Also speaking during the meeting, Minister of Agriculture and Rural Development Mohammad Abubakar said that Nigeria is very willing and ready to provide the appropriate ports for this grain hub in the country.

He said: “We appreciate and commend you that despite the war you still found time to extend a gesture of friendship to Nigeria and also donated grains. I can assure you that the relations with Ukraine will improve, we have been having business with Ukraine, especially in the agriculture sector and I can say that over 30% of our agricultural businesses are with Ukraine, especially in the area of wheat, fertilizer and other grains. And this I can assure you will continue to improve our relationship.”

Abubakar told journalists that the purpose of the grain hubs is to have a centre where Ukraine will be bringing grains and we will be helping other African countries, which will be helpful in case of emergency and even for donations to other countries.

He said: “We are looking at the Lagos Port and also Onne Port in Port Harcourt. The grains coming from Ukraine will increase the number of grains here and the hub will eventually become a business hub with other African countries and beyond and it will help to stabilize the price,” he added

The Agriculture Minister noted that Ukraine has the technology and know-how to help Nigeria in wheat production, stressing that capacity building will be part of the relationship which will produce a win-win situation.

On his part, The Ukrainian Minister said the grains from his country would arrive in Nigeria next month under the initiative called ‘Grains from Ukraine’.

He revealed: “Despite the war with Russia, the Ukrainian food industry wants to have closer relations with Nigeria and we are very thankful to you that your country is ready to develop these relations.

“Despite all the events going on in the world, our countries are ready to develop this cooperation. The Ukrainian government and the Ukrainian president are ready to pay a lot of attention to this development. We want to have regular contacts every year not only by our agriculture ministers but other ministers as well.”

He expressed optimism that: “Development of such hubs will make it possible to bring in high-quality grains into your country and it will influence prices in your country positively. Ukraine intends to develop two or three hubs in Africa and taking into consideration the capacity of your country, the grain hub in your country is priority number one. If we implement it well it would be a practical step towards businesses reaching a new level.”