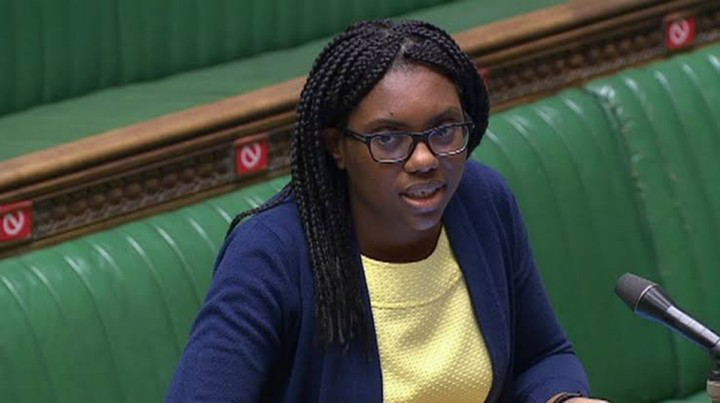 The Prime Minister of the United Kingdom (UK), Boris Johnson, in a not-so-surprising move, resigned his position on July 7, 2022.

Kemi Badenoch, has put herself forward as a candidate to become the next United Kingdom (UK) Prime Minister, promising “limited government” and “a focus on the essentials.”

The MP for Saffron Walden said she supported lower taxes “to boost growth and productivity, and accompanied by tight spending discipline.”

Writing in The Times, she also hit out at “identity politics” and said Boris Johnson was “a symptom of the problems we face, not the cause of them.

“People are exhausted by platitudes and empty rhetoric. Loving our country, our people or our party is not enough,” she said.

“What’s missing is an intellectual grasp of what is required to run the country in an era of increased polarization, protectionism and populism amplified by social media.”

She said governing Britain today requires “a nimble centre-right vision” that “can achieve things despite entrenched opposition from a cultural establishment that will not accept that the world has moved on from Blairism.”

Badenoch’s declaration capped off a day that saw many Tories declaring allegiances in the leadership race.

Kemi Badenoch’s recollection of her childhood in Nigeria brings tears to her eyes. It is only five months since the death of her father, Femi Adegoke, from a brain tumour.

Little could he have imagined that within three years of entering the government ranks, his daughter would be launching a bid to replace Boris Johnson as Prime Minister.

But Badenoch said her father instilled in her a sense of “personal responsibility”. Last week, she quit the government to help force Johnson’s resignation.

In an interview with The Telegraph, she has now set out her reasons for launching a bid to lead the Conservatives. In short, she believes the government has lost its way.

“I think that we have accepted a consensus that is not right – that the Government should get involved in everything and do everything,” she said.

But Badenoch, who quit as equalities and local government minister in a joint move with four friends and colleagues last week, believed that the government is “doing many things badly and doing things in the wrong way.”

Who is Kemi Badenoch?

Her childhood was spent partly in the US (where her mother lectured) and Lagos, Nigeria. She returned to the United Kingdom at the age of 16.

In an opinion piece published on the Daily Mail, Kemi stated; “It’s the opportunity I’ve enjoyed as a girl from Nigeria who came here as a 16-year-old and grew to love the United Kingdom”.

Considering her date of birth January 2, 1980, Kemi Badenoch as she is fondly called is currently 42 years old as at 2022.

Kemi studied Computer Systems Engineering at the University of Sussex, completing an MEng in 2003.

She studied law part-time at Birkbeck, University of London and completed an LLB in 2009.

Kemi got married to her husband, Hamish Badenoch in 2012. The couple has two daughters and a son.

Her husband works for Deutsche Bank and was a politician. He served as a Conservative councillor from 2014 to 2018 on Merton London Borough Council, representing Wimbledon Village.

After studying Computer Systems Engineering at the University of Sussex, Badenoch worked as a software engineer at Logica from 2003 to 2006.

She worked at the Royal Bank of Scotland Group as a systems analyst before pursuing a career in consultancy and financial services, working as an associate director of private bank and wealth manager Coutts from 2006 to 2013 and later a digital director at The Spectator magazine from 2015 to 2016.

***Kemi once worked at MacDonald’s UK as an apprentice. In a March 23, 2022 Twitter post where she shared the memory, she said; “Returning to @McDonaldsUK after 24 years was such a surreal experience but I loved every minute of it! Working there and doing an apprenticeship got me started in life so I was delighted to be able to meet their apprentices and to get back behind the counter“.

Badenoch joined the UK Conservative Party in 2005 at the age of 25.

At the UK’s 2010 general election, she contested the Dulwich and West Norwood constituency against the opposition, Labour Party’s candidate, Tessa Jowell, and came third behind Jowell, and Jonathan Mitchell of the Liberal Democrat Party.

In 2012, Badenoch unsuccessfully contested a seat on the London Assembly and was placed fifth.

Kemi Badenoch who had been fifth was therefore declared to be the new Assembly Member. She went on to retain her seat in the Assembly in the 2016 election.

Three years later, she was selected as a London Assembly member. Badenoch supported Brexit in the 2016 referendum on EU membership.

She was elected as Member of Parliament (MP) for Saffron Walden at the 2017 general election.

Badenoch served as Exchequer Secretary to the Treasury and Parliamentary Under-Secretary of State for Equalities from 2020 to 2021.

Badenoch resigned as a minister in July 2022.Announcing her resignation, she said; “With great regret, I resigned from the government this morning. It has been an honour being Equalities and Local Government minister. It was a privilege to have worked with so many great ministerial colleagues and civil servants in these roles”.

Shortly after her resignation, she announced her candidacy in the 2022 Conservative Party leadership election. The winner of the election will automatically become the nation’s Prime Minister.