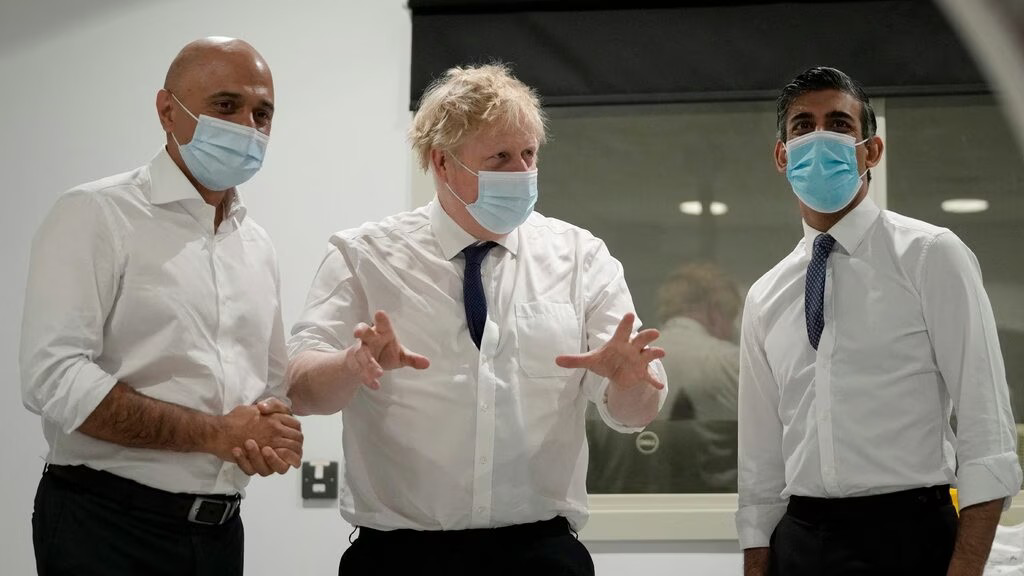 U.K. Prime Minister Boris Johnson’s leadership is hanging by a thread after the resignations of two of his most high-profile ministers and several other top officials and ministerial aides in the last 24 hours.

British Finance Minister Rishi Sunak resigned Tuesday evening, saying the government should be run “properly, competently and seriously.” Health Secretary Sajid Javid, likewise, resigned in protest against Johnson’s leadership, which has been beset by controversy and scandal in recent months.

As a number of senior Tories called for Johnson to quit, the government’s former Brexit negotiator David Frost also joined the fray, calling on the prime minister to step down without delay. In a newspaper column Wednesday, Frost echoed other critics of Johnson by stating emphatically that “it is time for him to go,” adding that “if he hangs on, he risks taking the party and the government down with him.”

Despite calls to resign, the prime minister shows no signs of being ready to stand down. Last night, he reshuffled his ministerial team to fill the vacancies created by the shock resignations.

Odds of a snap election

For now, the loyalty of top ministers, diminishes the immediate prospect of snap election in Britain. For that to happen, Johnson would have to resign or face another confidence vote. As he faced such a vote only last month, a new challenge would require a rule change to allow another vote within the next 12 months.

“Current party rules stipulate that Johnson cannot face another no-confidence vote until next summer. But the main risk now is either that those rules will be changed to force another vote, or Johnson is pressured to voluntarily step down,” Allan Monks, an economist at JPMorgan, said in a note Tuesday night.

“Events could move very quickly, with a Conservative leadership contest potentially putting in place a new Prime Minister in the next couple of months or so – ahead of the party’s annual conference in early October.”

Sterling fell to a new March 2020 low on Tuesday as the U.K.’s political instability played out. How markets react in the next few days will be closely watched.

“There’s paralysis and there’s so much uncertainty over how it will exactly play out,” Ben Emons, managing director of Global Macro Strategy at at Medley Global Advisors, told CNBC Wednesday.

“The way the markets responded, somewhat negatively as sterling and U.K. gilt yields fell, but then they recovered and I think that does indicate that as much as there’s uncertainty surrounding the Cabinet and Johnson’s position, it has not fallen apart, he does still have support,” he said.

“We’re not going to see any snap election, they have to elect a new leader for that to happen, so I think the markets take some comfort in [the fact that] we’re going to enter a period of some uncertainty but that uncertainty reflects the status quo, nothing will change in the economy or with policy,” he told CNBC’s “Squawk Box Europe.”

The latest political upheaval to hit the U.K. comes after a series of controversies, ranging from the “partygate” scandal with Johnson and multiple other government officials who were found to have broken pandemic lockdown rules, to sleaze allegations — the latest of which involves Chris Pincher, the Conservative Party’s deputy chief whip, responsible for maintaining party discipline.

Pincher resigned and was suspended as a Conservative Party MP last week, following accusations that he drunkenly groped two men at a private members’ club. It has since emerged that Johnson appointed him to the role despite knowing of previous misconduct allegations against him.

Johnson apologized for appointing Pincher as deputy chief whip, but it was too little too late with the high-profile resignations coming just minutes after.

Johnson has survived a number of challenges to his leadership in recent months, as well as calls for him to resign, particularly following a bruising confidence vote and the Conservative Party’s loss of two key by-elections in the last month as the British public’s faith in its leader wears thin.

A snap YouGov poll conducted Tuesday found that 69% of Britons surveyed want Johnson to resign. The poll of 3,009 adults found that only 18% want him to stay on.

Among the Conservative voters polled, 54% said they want to see Johnson go, while 33% want him to stay on, showing that Johnson has become an unpopular figure for many voters initially attracted to his leadership in 2019, when he won a massive 80-seat majority on his election bid to “get Brexit done.”

Britain’s opposition Labour Party leader Keir Starmer tweeted on Tuesday that “the Tory party is corrupted and changing one man won’t fix that. Only a real change of government can give Britain the fresh start it needs.”

Nadhim Zahawi, Britain’s new finance minister, told Sky News on Wednesday that he backed the prime minister and said “the team in government today is the team that will deliver” but Ed Davey, the leader of the opposition Liberal Democrats, told CNBC that “it’s clearly in the national interest for Boris Johnson to go” and that Johnson had been proven to be deceitful in the past.

“Having someone as a British prime minister who clearly doesn’t tell the truth and who lies on an industrial scale, is damaging to our democracy, it’s damaging to Britain’s reputation around the world and it’s damaging for our investment … We need a government that knows what it’s doing.”

Johnson has been accused of lying on multiple occasions during his time in office though he has invariably denied doing so, and has denied misleading parliament over the “partygate” scandal, over which there is an ongoing inquiry.