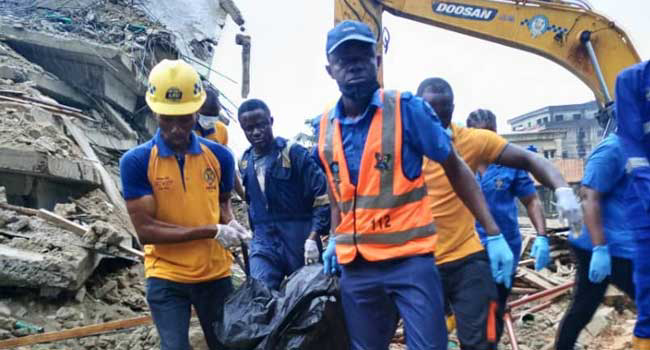 At least two persons have been confirmed dead in Lagos after a seven-storey building collapsed in the Lekki area of the state. It was gathered that the building, still under construction, caved in on Sunday morning.

Although the immediate cause of the collapse is still sketchy, emergency workers and security operatives have already moved to the site to possibly rescue the trapped victims.

They also confirmed that six persons were trapped and assured search and rescue operations have commenced at the site.

LASEMA said it responded to a distress call at the location at midnight and activated its response plan where six people were reported to have been trapped at the time.

The emergency management agency says it needed to deploy a heavy-duty equipment excavator for the rescue of the trapped victims.

“Upon arrival at the scene of the incident, an uncompleted 7-storey building undergoing construction was found to have collapsed. Six people are reported to be trapped under the rubbles of the collapsed structure,” Oke-Osanyintolu said.

“The Agency’s heavy-duty equipment excavator will be required for the rescue of the trapped victims. We have activated the Lagos State Response plan. Operation ongoing.”

Channels Television‘s correspondent, Dare Idowu, who was at the scene of the collapsed building observed that it had earlier been marked with a sealed sign by the state government.

The site had been marked as a  restricted zone by the Lagos State Building Control Agency since February 2021.