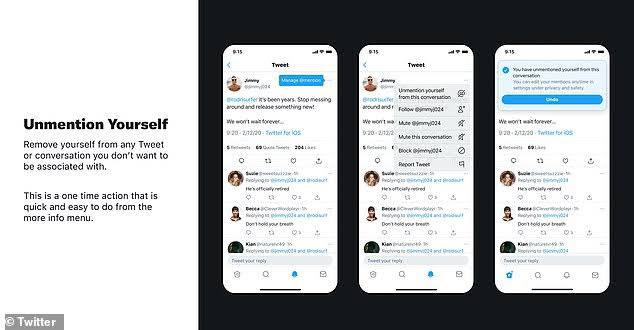 Twitter said Thursday that it’s started rolling out a new feature that lets users remove “@” mentions of them from any tweets or threads. The Unmention feature was first teased in June 2021 by Twitter privacy designer Dominic Camozzi as a “concept” that would let you untag your username throughout a thread, keep you from being mentioned again in that conversation and prevent further notifications.

In August, Camozzi said users responded that the term “unmention” was confusing, so the design was tweaked and the name rebranded as “Leave this conversation.”

Now the Twitter Safety account has officially posted about Unmentioning, indicating that the feature is available for select users on Twitter’s web platform and describing it as “a way to help you protect your peace and remove yourself from conversations.”

The feature untags your handle from any tweet and prevents you from being tagged in any replies. According to Camozzi’s mockups from last year, it also allows you to block specific users from mentioning you, without the need to block their accounts.

The company said Tuesday that it’s getting ready to test editable tweets on its premium subscription service, Twitter Blue.

A day later, developer Kevin Marks noted in a blog post that Twitter had started erasing embeds of deleted tweets, leaving only a blank box in their place. Previously, even if a tweet was deleted, the content remained on any web page the tweet had been embedded on.

Marks called the move “tampering with the public record,” but Twitter Senior Product Manager Eleanor Harding said in response that the company was looking to “better respect when people have chosen to delete their Tweets.”