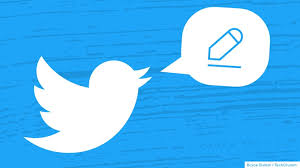 As any true blue Twitter user knows, the divide over the social network adding an edit button is the deepest ideological ravine of our time — and Twitter is poised to switch sides.

The company confirmed Tuesday that it is indeed working on a way to edit tweets. Twitter started tinkering around with a tweet-editing option last year and will test it out in Twitter Blue Labs, a corner of the platform’s premium subscription product where it tries out new features. Twitter Blue subscribers can expect to see an edit tweet button “in the coming months,” according to the company.

On Monday, the news broke that Tesla and SpaceX CEO Elon Musk was buying a sizable 9.2% chunk of Twitter and taking a board seat. In characteristic Musk fashion, the iconoclastic mega-billionaire spilled the beans about an edit button in a tweet a day before the company opted to make an announcement through official channels.

Twitter has shown a somewhat novel willingness to shape the platform based on user feedback, so it will be interesting to see what happens as the test begins. It’s easy to find strong opinions in favor of or vehemently against editing tweets, but much harder to know at scale what most people really want. Some Twitter power users have clamored for an edit tweet button for years, while others have serious misgivings about making misinformation and harassment even harder to manage on a social network still rife with serious problems.

In the past, the company has downplayed its interest in giving users the ability to edit tweets, saying that the feature barely ranked on its list of priorities. But 2022 Twitter is a very different beast, one that bears little resemblance to the stagnant social platform of yore — and one that’s no longer led by CEO Jack Dorsey, who faced investor pressure toward the end of his tenure to pick up the company’s pace.

Though Dorsey’s out, pick up the pace it did. Twitter has accelerated into all kinds of new products over the last two years, rapidly developing and sometimes discarding new features as quickly as they came. Fleets, Twitter’s experimental disappearing tweet product, lasted for less than a year after officially debuting in November 2020.

The company first launched its perk-packed premium monthly subscription service Twitter Blue a little less than a year ago and has generally been willing to see what sticks in recent months. That includes everything from TikTok-like reaction videos and photographer-friendly images to rolling policy changes that reframe the platform’s rules as a living document that responds to global events.