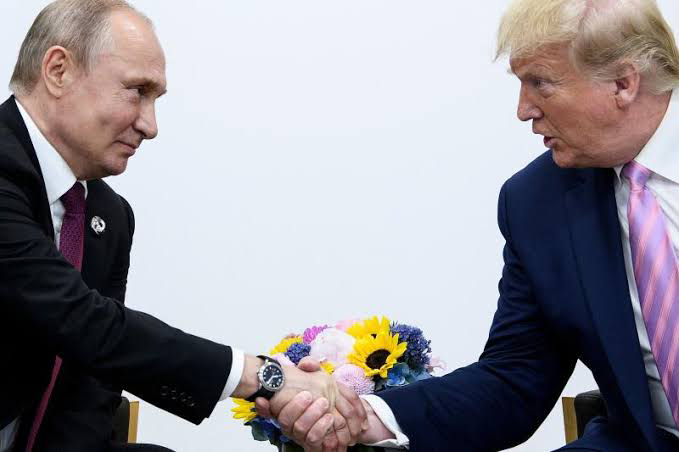 Donald Trump has said that Vladimir Putin is “very savvy” and made a “genius” move by declaring two regions of eastern Ukraine as independent states and moving Russian armed forces to them.

The former US president said that the Russian president had made a “smart move” by sending “the strongest peace force I’ve ever seen” to the area.

Trump, a long-term admirer of Putin who was impeached over allegations he threatened to withhold aid to Ukraine unless it could help damage the reputation of Joe Biden, praised the Russian president’s moves while also claiming that they would not have happened if he was still president.

“Here’s a guy who’s very savvy … I know him very well,” Trump said of Putin while talking to the The Clay Travis & Buck Sexton Show. “Very, very well. By the way, this never would have happened with us. Had I been in office, not even thinkable. This would never have happened.

Trump’s intervention was criticized by the two Republicans serving on the House select committee investigating the January 6 Capitol riot, who are among the few Republicans who have been critical of the former president. Liz Cheney tweeted that Trump’s statement “aids our enemies. Trump’s interests don’t seem to align with the interests of the United States of America.”

Adam Kinzinger, meanwhile, retweeted a screenshot from the House Republicans that showed Biden walking away – which was captioned with the comment: “This is what weakness on the world stage looks like” – to denounce it in fiery terms. Kinzinger wrote: “As still ‘technically’ a member of house Republicans, let me, with all my might, condemn this damn awful tweet during this crisis. You can criticize policy but this is insane and feeds into Putins narrative. But hey, retweets amirite?”

During a lengthy speech on Monday that questioned Ukraine’s right to exist, Putin said he recognized the independence of two breakaway regions in Ukraine’s east – the Donetsk People’s Republic (DNR) and the Luhansk People’s Republic (LNR) – and that Russian troops will be sent there for “peacekeeping operations”.

The move has been roundly condemned by western leaders as a dangerous escalation of the tense situation at the border between the two countries and a violation of Ukraine’s sovereignty.

Linda Thomas-Greenfield, the US ambassador to the United Nations, said that Putin’s declaration was “nonsense” and that Russia was “creating a pretext for war”. Boris Johnson, the British prime minister, said that Russia was “plainly in breach of international law” by trying to break off the two territories.

Other than Cheney and Kinzinger, most other Republicans and leading conservative figures have vacillated between condemning Biden as being weak in his response to the situation and claiming that Putin is being vilified in a conflict that should not interest the US.

“Hating Putin has become the central purpose of America’s foreign policy,” said Tucker Carlson, the rightwing Fox News host on Tuesday. “It’s the main thing that we talk about. Entire cable channels are now devoted to it. Very soon, that hatred of Vladimir Putin could bring the United States into a conflict in eastern Europe.”

PREVIOUS POST Egypt, Nigeria, Kenya have the most advanced ecosystem for tech developers in Africa, according to Google
NEXT POST Twitter honours Davido, Wizkid, Burna Boy and 7 others with GOAT emoji