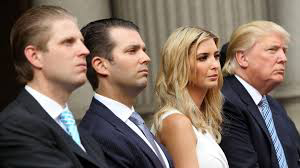 Former President Donald Trump and his two eldest sons, Eric Trump and Donald Trump Jr., are scheduled to sit for depositions for a civil lawsuit alleging they promoted a scam multi-level marketing scheme.

The ex-president is scheduled to sit for the deposition on June 16. Donald Trump Jr. and Eric Trump will sit for their own on May 10 and May 12 respectively, according to a new court filing, which was signed by attorneys representing the Trump family members.

The parties have not yet agreed on a deposition date for Ivanka Trump, also a defendant in the lawsuit.

The Trump family members will take the depositions as part of a long-running lawsuit against them, the Trump Organization, and a multi-level marketing company called ACN.

Four plaintiffs sued after saying they lost thousands of dollars from joining ACN and trying to sell its telephones with video capabilities.

Trump and his family members had promoted ACN extensively on “The Celebrity Apprentice” in 2009 and 2011 — years after the release of the iPhone — and had done numerous live events and promotional interviews. The deal with ACN, and the work Trump did on the show, had helped Trump survive financial ruin, according to a New York Times analysis of his tax records.

ACN and Trump have denied wrongdoing and say the lawsuit is politically motivated.

As with many lawsuits filed against Trump, the one against ACN and his family had stalled during his presidency. Since he left office in 2021, it has moved slowly through the discovery phase.

The new filing is a status update on the discovery phase from attorneys representing both the plaintiffs and the Trump family members. It says that MGM, which produced “The Celebrity Apprentice,” gave the former ACN members’ lawyers unaired footage from the show to use in the lawsuit.

“Plaintiffs have completed their on-site review of unaired footage from two episodes of The Celebrity Apprentice, and have designated certain footage (under 50% of the total footage) that Plaintiffs believe is relevant for copying, with Plaintiffs bearing the reasonable costs,” the lawyers wrote. “Nonparties Metro-Goldwyn-Mayer Studios Inc. and JMBP, LLC have copied and provided in full the media assets designated by Plaintiffs during the initial phase of their review.”

Trump has sat for only one deposition since leaving office, in October, for a lawsuit alleging his security guards roughed up protesters outside of Trump Tower in 2015.

The New York Attorney General’s office has also subpoenaed him and his eldest children for its civil investigation into whether the Trump Organization broke financial laws by misrepresenting property values. The Trump Organization is appealing a judge’s decision ordering them to sit for depositions in that case.