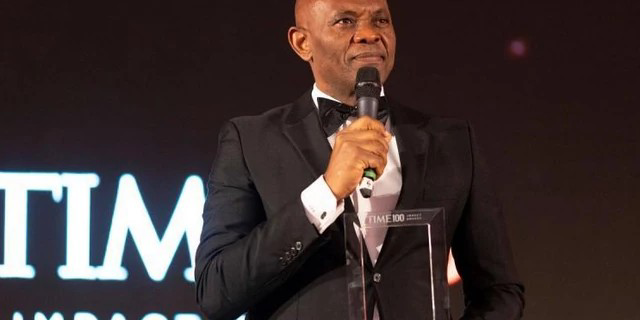 Nigerian banking tycoon Tony Elumelu has been named as one of the awardees of the TIME100 Impact Awards 2022. The Chairman of Heirs Holdings was honoured with the inaugural TIME100 Impact Awards list for his selfless humanitarian activities and support for business up-scaling for Africans in Africa.

The award recognises global leaders who have gone above and beyond to move their industries and the world forward. Apart from Elumelu, six other global leaders were also honoured with the award. The awards were presented at the Museum of the Future in Dubai.

During his acceptance speech, Mr Elumelu advocated for more entrepreneurs and investments across the world to Fastrack the achievement of the Sustainable Development Goals, SGD. He explained this by telling the story of his humble beginnings and how he was able to birth the Tony Elumelu Foundation through hard work and focus, which has supported over 15,000 young business owners around Africa with $5,000 each.

“The world is in need of people like us—more than ever before,” he said to the crowd, which included celebrities, politicians and prominent business leaders.

“We should pull resources together; we should commit now to help in any way possible in economically empowering others”, he said.

British-Ghanian architect Sir David Adjaye, whose designs include the National Museum of African American History and Culture in the US, as well as the Abrahamic Family House in Abu Dhabi, was also honoured for his work.

Mr Adjaye was honoured, according to Time, for “reorienting the world’s attention and shining a light on cultures from every corner of the world”.

The occasion was attended by notable personalities, including civil rights activist Amanda Nguyen, who was named in Time’s first Women of the Year list this month; Nigerian actress and philanthropist Omotola Jalade Ekeinde; French-Tunisian contemporary artist eL Seed; US model Tyra Banks; and Sheikha Lubna Al Qasimi, the first woman to hold a ministerial position in the UAE.