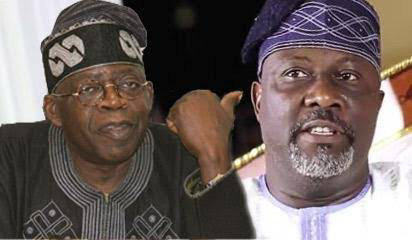 A former Kogi Senator, Dino Melaye has said the presidential candidate of the All Progressives Congress (APC), Bola Tinubu sees the office of President as a life entitlement.

He added the reason Tinubu is eyeing Aso Rock Villa is because he sees it as a retirement benefit for supporting President Muhammadu Buhari to be the nation’s leader in 2015.

Melaye, who is the spokesperson for the presidential candidate of the Peoples Democratic Party (PDP), former Vice President Atiku Abubakar, made these statements in a video he made and posted on his Facebook page on Saturday.

The former lawmaker was reacting to spokesperson of Tinubu Presidential Campaign Council, Festus Keyamo’s attack on Atiku that he has no experience to govern Nigeria, adding that the standard bearer of the Labour Party, Peter Obi is more experienced.

Melaye also said Atiku is running for the office of President based on credentials.

“He sees it as a retirement benefit for supporting Buhari. Atiku is running on credentials, not running for entitlement.