Tinubu Returns From France, Prays With Dignitaries In Lagos 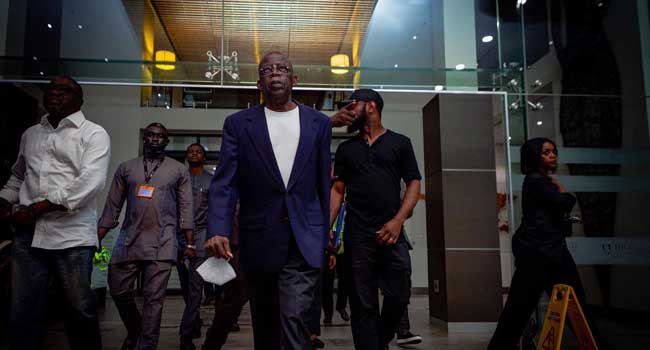 The presidential candidate of the All Progressives Congress (APC), Bola Tinubu, on Saturday returned to the country after spending several days in France.

Tinubu had left Nigeria for France on June 27, with his media aide saying the trip was for “important meetings.”

Though he left the francophone country on Friday, the ex-Lagos State Governor announced his arrival in the early hours of Saturday.

“Grateful to Almighty Allah for journey mercies. Glad to be home and looking forward to what is ahead. Eid Mubarak,” he said via Twitter.

He was thereafter joined by the Lagos State Deputy Governor, Kadri Hamzat, Head of Service, Hakeem Muri-Okunola, among others, to observe the Eid-El Kabir prayer at the Lagos Island Central Mosque.

After his prayers, Tinubu expressed gratitude to God for making it possible for Nigerians to survive, notwithstanding the challenges.

He expressed hope that the leaders will learn from the mistakes and successes of previous years to improve the conditions of the people.

“A lot of thanks to God almighty that we are able to survive the past year and restore hope for the following year,” he said.

“Looking at our successes and failures, learn from it and improve the country, condition, quality of life of our people and that is very paramount.”

On the Eid-el-Kabir celebration, the APC presidential candidate called on Nigerians to be agents of love, warning against spreading differences among the citizens.

He added, “We have no control of who we are, where we are born, the religion to follow. The faith of God almighty is the same God. We have to tolerate all of that.”

Tinubu had been in France in the last couple of weeks to rest and strategise ahead of the 2023 presidential elections.

During his visit to France, he was visited by billionaire businessman, Femi Otedola, and Ogun State Governor, Dapo Abiodun.