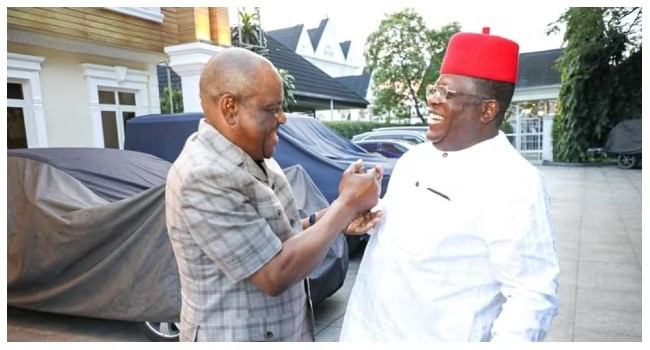 Governor Dave Umahi of Ebonyi State says the presidential candidate of the All Progressives Congress (APC), Bola Tinubu, does not need the logistics support of Governor Nyesom Wike of Rivers State.

Umahi said rather, Tinubu needs the votes of the people of the oil-rich state.

Umahi, an APC governor and one of the coordinators of Tinubu’s campaign in the South-East, made this known on Tuesday when he commissioned the Akpabu-Itu-Umudiogha road in the Emohua Local Government Area of Rivers at the invitation of Wike.

Wike, a Peoples Democratic Party (PDP) governor, not on good terms with his party’s presidential candidate, Atiku Abubakar, had promised logistics support for the campaigns of the presidential candidate of the Labour Party (LP), Peter Obi; and his New Nigeria People’s Party (NNPP) counterpart, Rabiu Kwankwaso who recently commissioned projects in Rivers.

With the 2023 presidential poll about three months, there are fears that the intra-party squabbles between Wike and Atiku over the chairmanship of Iyorchia Ayu would affect the chances of the Adamawa-born politician at the polls next February.