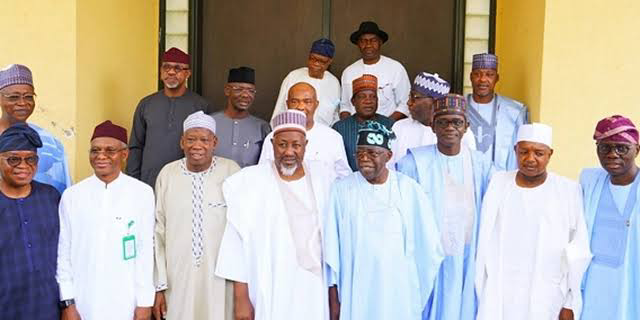 Presidential aspirant and National Leader of the All Progressives Congress, APC, Bola Tinubu, is currently meeting with members of the Progressives Governors Forum at the Kebbi State Governor’s Lodge, Asokoro, Abuja.

The meeting is coming a few hours after his political associate and Vice President, Yemi Osibanjo, declared his intention to vie for the office of the president in the 2023 general election.

This disclosure is contained in a tweet post by the Chief Press Secretary to the Lagos State Goovernor, Gboyega Akosile, on his official Twitter account, on Monday, saying that 17 APC governors were in attendance at the meeting.

Others include Dapo Abiodun of Ogun State, Hope Uzodinma of Imo State, Abdullahi Sule of Nassarawa state, amongst others.

Although Tinubu is yet to officially declare for office, he had in January informed the President, Major General Muhammadu Buhari (retd.), of his intention to succeed him.