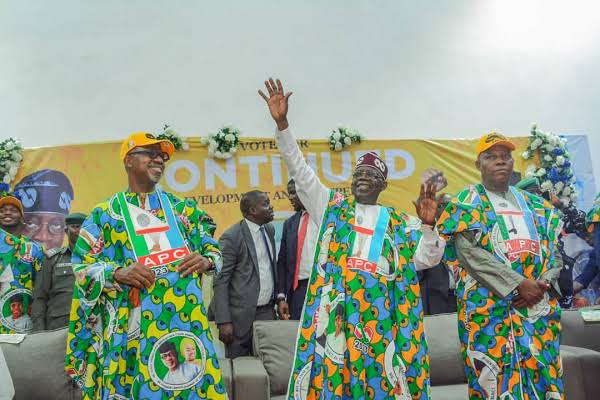 The presidential candidate of the All Progressives Congress, Bola Tinubu, has blamed the lingering fuel scarcity and hike in the fuel price in the country on the handiwork of some saboteurs.

Many Nigerians have been groaning over the scarcity of fuel and the hike in the pump price ranging from N270 to N400 per litre in recent weeks.

The flag bearer who spoke in Yoruba language while addressing the crowd said there was a deliberate move by some people he described as saboteurs to derail the coming elections.

Tinubu who did not reveal the identity of the people behind the scarcity also accused the same people of hoarding the currency to stop the coming elections.

He however urged the people to endure the pains and ensure they cast their votes for him, regardless of fuel scarcity and hike in the pump price.

Tinubu who was flanked by his running mate, Kashim Shettima; the Ogun State Governor, Dapo Abiodun,  pioneer national chairman of the APC, Bisi Akande; Deputy Director of the APC Campaign Organisation, Adams Oshiomhole among others, said the APC would win the election

He said, “They keep fuel, they keep money, they are the ones who know why they are doing that.

“If you like, change the ink of the naira. We are going to win and the PDP will fall down.

“The city boy is here. I am the son of the soil. We will take the government from them. The bad people.

“They don’t want the election to take place. They want to stop the election. Will you allow them?”

“They have been scheming to create a fuel crisis but forget about it. Relax; I, Asiwaju, have told you that the fuel supply issue will be permanently addressed. Whoever wants to eat the honey embedded in a mountain won’t worry about the axe. Is that not so? And if you want to eat palm kernel, you would bring a stone and use it to break it, and then the kernel will come out

“Let them increase the price of fuel; only them know where they have hoarded fuel, they hoarded money, they hoarded naira; we will go and vote, and we will win.

“Even if they changed the ink on Naira notes. Whatever their plans, they will come to nothing. We are going to win.”

Tinubu took a swipe at the Peoples Democratic Party (PDP), saying the party and its gladiators would fail in the elections, describing them as traitors

Those in the PDP will lose (won ma lule).

“I am homeboy; I have come here; you will not be put to shame. We will take over the government from them, the traitors who wanted to contest with us. They had no experience,” he added.

He assured the Nigerian youths and students of having faith in him and his party and ended strikes in the country’s ivory towers.

“On this one, I guarantee you one thing: there will be a student loan. Nobody will drop out of University because of school fees. I assure you that. Nobody will have to repeat for eight years and not graduate. Haba! We are too smart, and we are brilliant, we are courageous, we are sharp, we will make four years course four years course. Do you agree?

PREVIOUS POST Aviation Strike: Minister Apologizes To Passengers, Airlines, vows to stop Strikes And Riots Around Airports
NEXT POST Foreign students may be forced out of the UK if they haven’t got a ‘skilled job’ six months after graduating