Tesla Gets a Big Win That May Cost Legacy Carmakers Millions 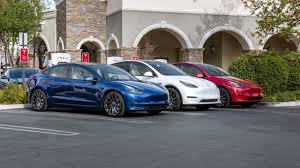 The automotive group will officially open its fourth production plant, in Austin, on April 7. This would enable it to produce just over 1.42 million vehicles in 2022 against 930,442 in 2021, industry sources estimate.

As if that were not enough to knock out competitors, who are struggling to produce 100,000 EVs a year, the federal government has just reinstated a rule that penalizes legacy automakers. This rule at the same time can increase Tesla’s revenue.

The U.S National Highway Traffic Safety Administration will assess larger penalties and fines for carmakers whose vehicles do not meet fuel-efficiency requirements, the so-called corporate average fuel economy standards, according to a decision signed last week by Steven Cliff, the agency’s deputy administrator.

“NHTSA is withdrawing the interim final rule and reverting to the December 2016 final rule that would apply the adjustment for the CAFE civil penalty rate beginning with model year 2019,” the rule reads.

Concretely, this means that automakers will have to pay $14 for every additional 0.1 mile per gallon less than the required fuel economy for all noncompliant vehicles sold from 2019 until 2021. That rate was initially $5.50, but NHTSA has increased it.

For model year 2022, the penalty rises to $15, according to the regulator.

This rule will cost hundreds of millions of dollars to classic-car manufacturers like Stellantis  (STLA) – Get Stellantis N.V. Report, born of the merger between Fiat Chrysler and France’s Peugeot. On the other hand, it’s good for Tesla, whose cars are up to standard.

The decision could cost Stellantis as much as $572 million by the company’s prior estimates, Reuters reported. At the same time, it boosts the value of compliance credits sold by Tesla because groups whose vehicles far exceed the required standards can sell credits to companies with cars that sit below the standards.

Stellantis in February said in its 2021 earnings report that it expected impairment expenses of $138 million in North America primarily “due to the change in CAFE penalty rates for future model years.”

“Manufacturers would be more likely to make improvements to the fuel economy of their fleets to avoid paying the higher civil penalty rates,” the federal agency explained.

“Higher civil penalty rates in model years 2019 through 2021 may cause manufacturers to more rapidly implement fuel-saving technology so that they may accrue credits to be carried back to cover compliance shortfalls,” NHTSA argued.

Legacy automakers had managed to get former President Donald Trump to freeze the increase in penalties for those that failed to comply with the CAFE requirements. These standards required light vehicles to have a fuel consumption of around 54.5 miles per gallon by 2025.

The Trump administration and legacy automakers considered this goal unachievable. They therefore advocated a revision of these energy efficiency rules, which the Obama administration adopted in a rush at the end of 2016.

Automakers warned at the time that the penalty hike would cost the industry at least $1 billion annually. Automakers would pay $294 million for model year 2019 vehicles under the new rate, according to NHTSA, more than twice the $115.4 million under the old rate.

The rule will be effective 60 days after the date the agency publishes it.