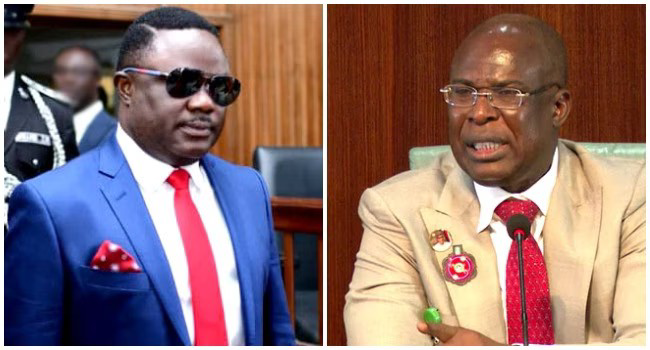 Groups of supporters have presented the All Progressives Congress’ nomination and expression of interest forms to Cross River State Governor, Ben Ayade and Minister of State for Petroleum Resources, Timipre Sylva.

The duo become the latest APC members who have had the N100m forms purchased on their behalf by supporters.

This comes ahead of Tuesday’s deadline for the sale of nomination and expression of interest forms for the All Progressives Congress.

The International Conference Centre, Abuja, was agog with activities as several aspirants vying for various electoral offices stormed the venue to obtain their forms at the last minute.

Receiving his form at the NNPC Towers from his supporters, Sylva said, “I feel very honoured and humbled for the show of love and this show of commitment not to me, but to Nigeria. I have tried my best since I was appointed by Mr. president to this office to do my service to Nigeria. But to realise that my efforts have been noticed by you Nigerians and that you Nigerians by yourself will go and take the trouble of obtaining the nomination and the expression of interest forms for me is very humbling. And I must also say very shocking at the same time.

“But I’m very happy and pleased by this gesture. So what I will do now, I will not give you a straight answer right now. But I’m really thankful for what you have done because I need to consult I need to consult my constituency and consult leaders of this country and then I’ll come back to you to let you know if I have taken the position also to run for this office,” he said.

Mr Suleiman Abdullahi, the spokesman of Northern Solidarity group, who purchased the form for Sylva, said, “We picked this presidential nomination forms to surprise the Minister state for Petroleum, Chief Timipre Sylva, to contest for the presidency of this country, which we found him capable to do. We are his fans from the Northen part of Nigeria.

“Nigerians can see from his antecedent from the state level to the federal level that he has garnered necessary experience and well acceptable across the country. So we know that his chances of withe ticket of the APC is brighter.”