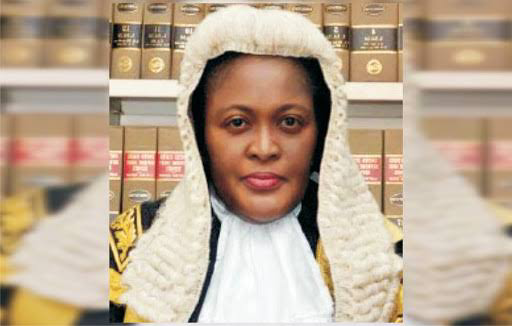 Justice Mary Ukaego Peter Odili on Thursday bowed out of the Supreme Court of Nigeria following her retirement from public service, having attained 70 years on May 12, 2022. Justice Mary is the wife of Dr. Peter Odili, who served as governor of Rivers State between 1999 and 2007.

The retired jurist recommended that the president should create and take charge of a new Ministry of Youths, Employment and Social Welfare, and that the Federal Government should pay pension arrears of retired security officers while engaging their expertise for the betterment of the nation.

“That is the reason I propose that the Head of State should take on the garb of Minister of Youth, Employment and Social Welfare or such related name so that he directs the implementation of what is called for and put in place without middlemen, utilising assistance of adequate and qualified personnel.

Similarly, the governor of respective states take over such ministries as the situation is needed to be done to stem the current tragic situation.

“Again, an area that should be given a consideration is the retirement of our uniformed men and women, military, police.

These retired personnel that are now too numerous and left to rot at the various homes with their knowledge not utilised is a matter worthy of attention by the authorities which the apparatus of government can factor the use of these highly trained individuals to the benefit of all.”

She also stated that calls for restructuring should be attended to immediately else the nation loses an opportunity to “set the ship of the state on the right course”.

She advised that there was need to remember the incidents of the past because history is beckoning on every Nigerian to play a positive role so as not to further destroy the most populous black nation on earth. “I will talk to my country men, women and children loud and clear.

As I had earlier mentioned, I lived through the Nigerian Civil War which was caused by the January 15, 1966 army coup and later the 1966 pogrom as it was referred to.

“In the July incident, I saw with my eyes, men running in their underpants with or without singlets from the Ikeja Army Cantonment which presentation made us leave out home at Ikeja GRA as the killings moved from the Igbo soldiers in the barracks to civilian population of Igbos and we had to take refuge in a room in Surulere and later to the East and the follow up war that incepted in 1967.

“Some of the actions or speeches that propelled the unfortunate war which took the lives of millions of our people are being re-enacted at this time hence the necessity for this reminder.”

According to her, some of the good initiatives at the time have been abandoned by authorities and individuals in the present day resulting in the misfortunes in Nigeria including massive unemployment and insecurity.

More so, Mrs. Odili advised that state of origin should not just be based on someone’s ethnic origin but also where a person has lived for a while.

Governors of Rivers, Bayelsa, Edo and Plateau states as well as other stakeholders including the governor of Central Bank of Nigeria (CBN), Godwin Emefiele, were present at the session.

But he urged the judiciary to stand against conflicting judgments and called for sanction against judicial officials who are found to have violated rules of court as well as indulging in forum shopping.

PREVIOUS POST Earn dollars through agriculture instead of getting involved in money rituals – Akeredolu
NEXT POST Ngige pulls out of presidential race, says he wants to focus on his job