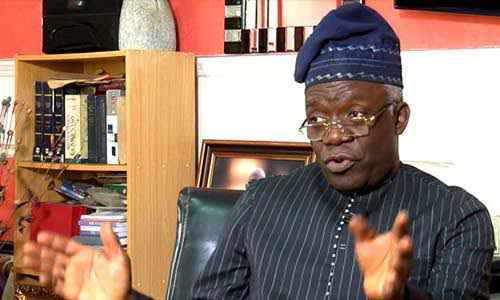 A Senior Advocate of Nigeria Chief Femi Falana has described the alleged withdrawal of resignation letters by Abubakar Malami and Chris Ngige as illegal and gross contravention of the stipulated law.

Media reports had claimed that the AGF and the Minister of Labour had withdrawn their resignation letters to focus on their jobs.

But AGF Malami confirmed to Vanguard that “I have not resigned as the Attorney General of the Federation but have only withdrawn from the Kebbi governorship race,”

Falana, however, noted in a statement he personally signed that “At the last Federal Executive Council meeting on Wednesday, May 11, 2022, President Muhammadu Buhari directed all Ministers and other political appointees who aspire to contest for elective offices in the 2023 General Elections to resign their appointments.”

He noted that, “In a farewell meeting held with the former Ministers on Friday, May 13, 2022, President Buhari thanked them for serving the nation sacrificially, ”with dignity and honour”. While wishing them success in the upcoming elections and in future endeavours the President commended them for their decision and courage to contest for elective offices and their compliance with his directive.

Having resigned from the Buhari administration Mr Abubakar Malami SAN and Dr Chris Ngige were reported to have withdrawn their letters of resignation after the farewell meeting. Such withdrawal is illegal as it constitutes a gross contravention of section 306 (2) of the Constitution which stipulates that

“Since the resignation of the former Ministers has taken effect they cannot return to the cabinet either of their own volition or on the directive of the President.”