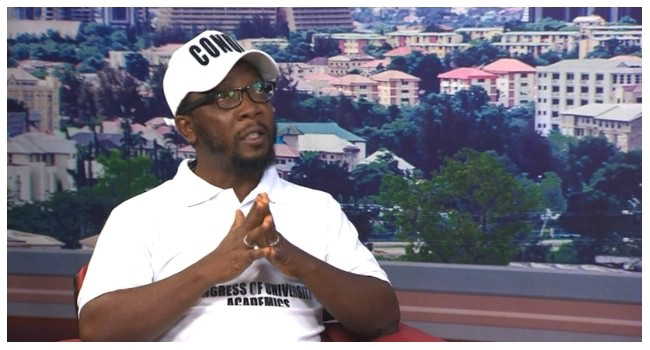 The newly registered Congress of Nigerian Universities Academics (CONUA) has appealed to the Academic Staff Union Of Universities (ASUU), and the Federal Government to reach an “amicable agreement” so that students of public universities can return to the classrooms.

“We’ve not been on strike, we just appeal to the Federal Government and our sister union (ASUU) to reach an amicable agreement so that the universities can be open so that we can go back to doing our teachings,” CONUA National Coordinator, Niyi Sunmonu, said on Channels Television’s Sunrise Daily on Wednesday.

The official also called for collaborative engagement among all the registered academic unions on issues of concern.

As talks between ASUU and the Federal Government broke down amid the over seven-month strike by ASUU, the Minister of Labour and Productivity, Chris Ngige, on Tuesday, registered two factional academic unions – CONUA and the National Association of Medical and Dental Academics (NAMDA).

The minister explained that the two bodies will exist alongside ASUU, adding that the two associations will enjoy the rights and privileges accorded to other academic unions in the tertiary education system.

ASUU has been on strike since February 14, 2022, over unpaid allowances, poor welfare, and payment software, among others.

‘CONUA Not On Strike But Our Members Are Not In Classrooms’

Sunmonu, a lecturer at the Obafemi Awolowo University (OAU), Ile-Ife, in Osun State, South-West Nigeria, said CONUA was formed in 2018 after a fallout with the ASUU branch in the university over “constitutional violations” and the selection of a vice-chancellor.

According to him, CONUA first filed an application for registration in April 2018, and the union has members in 17 universities in the country.

“We expect to have more members with the recognition and registration by the Federal Government,” he said, adding that CONUA has over 600 members in OAU alone.

“CONUA as an organisation has not been on strike. There has been no time that a strike was declared,” he said.

Asked whether the ASUU strike has so far affected CONUA, he said, “ASUU is an independent union and it has no bearing over another union.

The CONUA coordinator also distanced himself from partisan politics. When asked whether he is a member of the All Progressives Congress, he said, “I am not a member of APC or any political party.”

Part of the lingering issues between ASUU and the Federal Government is the payment software. Whilst the government currently subscribes to the Integrated Payroll and Personnel information system (IPPIS), ASUU believes the University Transparency and Accountability Solution (UTAS) is more efficient.

On whether CONUA is for IPPIS or UTAS, Sunmonu said there is no payment software that is foolproof, insisting that the bone of contention is the quest for a better wage structure regardless of how it is paid.

‘Our Salaries Have Not Been Paid’

The official said the salaries of CONUA members have also not been paid like their ASUU counterparts.

“Our salaries have not been paid though we have been working,” he noted.

Although he shared sentiments of underfunding of universities with ASUU, he faulted the approach of using industrial actions to press home demands. “Negatives of strike outweigh positives,” he said, stating that constructive engagements must be explored.