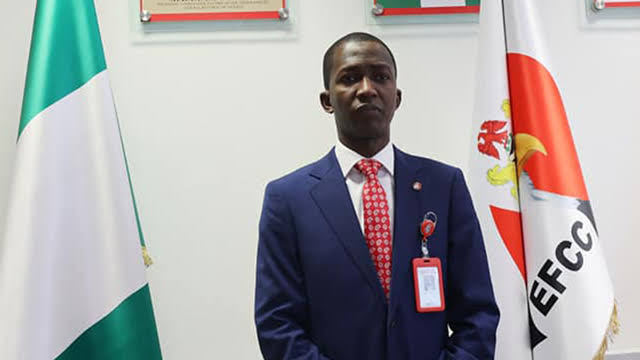 The Economic and Financial Crimes Commission (EFCC) on Wednesday appealed to the media to stop promoting corrupt citizens.

The chairman of the anti-graft agency, Abdurasheed Bawa, made this plea in Abuja during the opening of a workshop on financial crime reporting organised for the journalists covering its activities.

He noted that the media sometimes portrayed the approach of the commission in fighting cybercrime as draconian.

The EFCC boss added that the reportage was perhaps borne out of a poor understanding of the anti-graft agency’s modus operandi.

I want to use this opportunity to further urge media practitioners to put the interest of our country at heart, particularly as it relates to a conscientious effort not to celebrate the corrupt in our midst.

“I urge you to expose them on the pages of your newspapers, screens of television or on your various online platforms.

“The war against corruption is a worthy fight for the soul of Nigeria, and for the future generation; it should not be left to the EFCC alone,” he said.

Bawa noted that the decision of the commission to sponsor the workshop underscored the importance it attached to the role of the media in the fight against economic and financial crimes.

He said the media had given the EFCC visibility and made it a reference point in effective law enforcement in Nigeria.

Bawa said the workshop was one of the interventions by the commission to improve the capacity of the media to deliver on its constitutional mandate.

PREVIOUS POST Japan ask young people to drink more alcohol in bid to boost the country’s economy
NEXT POST Nigerian govt insists on ‘no work, no pay’ for period of ASUU strike