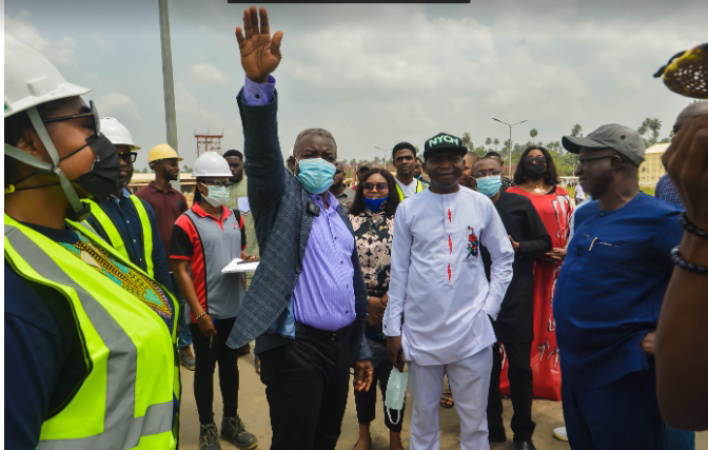 Stakeholders at the recently concluded tour of the Board’s projects, partnerships and initiatives in the Niger Delta region have commended the Nigerian Content Development and Monitoring Board (NCDMB) for demystifying the establishment of modular refineries in the country.

The stakeholders gave their commendations after visiting the 5000 barrels per modular refinery established by Waltersmith Refining and Petrochemical Company Limited at Ibigwe, Imo State in partnership with the NCDMB.

The General Manager, Corporate Communication and Zonal Coordination of NCDMB, Dr. Ginah O. Ginah who led the team revealed that the significance of the tour was to showcase the only operational modular refinery in Nigeria and the Board’s intervention to increase the capacity of Nigerian companies by partnering with them through funding which, thereby demonstrating that refining crude oil into petroleum products in-country is achievable.

He enumerated the economic impact of the refinery to include job creation, reduction of capital flight, infrastructural development, and community development as a demonstration of what the Board is doing to catalyse industrial development and drive the nation’s economy. He reiterated that the initiative and other strategies will enable the Board ramp up Nigerian Content in terms of human and organizational capability to 70 percent by 2027.

He added that the tour will be carried out on a regular basis to showcase the Board’s projects and facilities to critical stakeholders.

In his remarks, the Imo State Commissioner of Information and Strategy, Hon. Declan Emelumba who was represented by a Deputy Director in the Ministry, Mrs. Violet Igwe expressed delight at the level of work done by the Board to reduce the perennial hardship faced by Nigerians due to the non-availability of petroleum products supply.

Hon. Emelumba disclosed that if such a facility could be replicated in many oil-bearing communities, it would reduce the incidence of adulterated petroleum products and socio-economic challenges in the country.

The Chairman of the National Youth Council of Nigeria (NYCN), Owerri Zone, Comrade Udoka Chimonya also expressed his appreciation to the Board. Represented by his Vice Chairman, Comrade Justice Opara, he disclosed that the tour afforded youths the opportunity to engage with the Board and see laudable projects which would create job opportunities and stem restiveness in the area.

The youth leader pledged to embark on a sensitization tour of the state to avail young people of opportunities and programs the Board is bringing to the area. He noted that the establishment of the Waltersmith modular refinery in Imo State and similar other projects would meet the energy needs of Nigerians.

In his presentation, the General Manager, Waltersmith Refining and Petrochemical Company Limited, Mr. Abdul Isah who spoke through the Refinery Manager, Engr. Charles Okon narrated that the company which was initially an Exploration & Production company decided to venture into the midstream sector of the industry. “With the support from NCDMB were able to get to this stage. We appreciate the Board’s cooperation because it has been a fantastic relationship with us and for the entire country”, he stated.

Mr. Isah indicated that the refinery is a fully automated facility monitored from any location through Human Machine Interface (HMI) software devices which checks any compromise in quality and quantity of the products. He further stated that the refinery which is currently operating with no downtime since its inception in November 2020 produces AGO, DPK, HFO, and Naphtha. The company, he said, hopes to run successfully until it meets its optimum capacity of 50,000 barrels per day supply in the long run.