Squatters take over a London mansion linked to a Russian oligarch 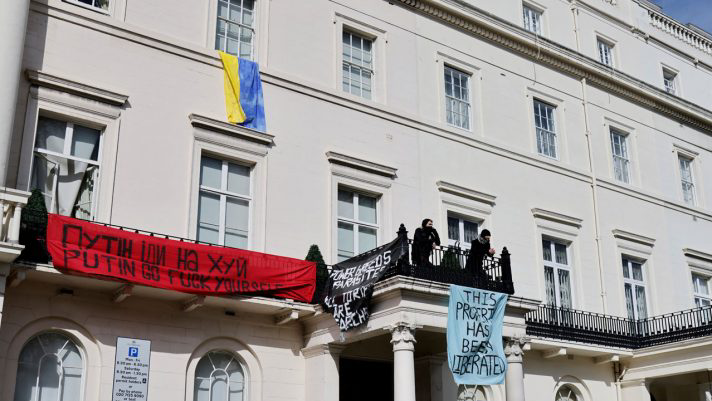 Squatters have taken over the London mansion suspected of belonging to Oleg Deripaska, a Russian billionaire who has been sanctioned by both the United States and the United Kingdom.

Riot police arrived at the luxury property in Belgrave Square on Monday after squatters entered the mansion and covered it with flags. Footage from the scene shows a Ukrainian flag hanging from one window, and handwritten banners reading “This property has been liberated” and “Putin go f*** yourself.”

Westminster Police said on Twitter that officers arrived at the property around 1 a.m. local time after being called, and made contact with “a small number of people inside.” It added that specialist officers were on the scene and would determine the appropriate next steps based on “the safety of the officers and those inside and … the large and complex nature of this property.”

“Officers have completed a search of the property in Belgrave Square and are satisfied there are no protestors inside,” the department said two hours later. “We continue to engage with those on the balcony as we balance the need for enforcement with the safety of all involved.”

The BBC has identified the squatters as belonging to a group called the London Makhnovists. The name references Ukrainian anarchist Nestor Makhno, who revolted against the Russian White Army in 1917-1923.

“By occupying this mansion, we want to show solidarity with the people of Ukraine, but also the people of Russia who never agreed to this madness,” they said in a statement reported by Reuters and other outlets. “You occupy Ukraine, we occupy you.”

The group added that the mansion would “serve as a centre for refugee support” and that it would target other properties as well.

Reuters reports that London High Court documents from 2007 identified Deripaska as the beneficial owner of the Belgrave Square mansion. The previous year, a judge said the property — along with another house he owned outside of London — was worth the equivalent of $52 million.

The squatters’ occupation comes less than a week after the U.K. government targeted Deripaska and six other Russian oligarchs with a raft of sanctions including an asset freeze and travel ban.